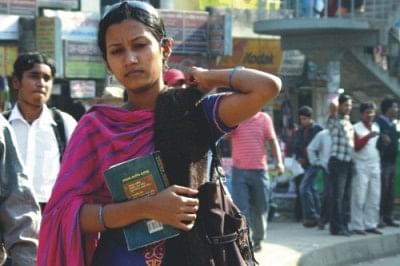 SIXTEEN, waist-length hair in a thick braid, still uncertain of my way solo in Dhaka, climbing into a rickshaw. I nearly get jerked onto the street as two young boys pull me by my hair and cycle off. It was fun. For them, I mean. Me? I looked at the people smirking around me as the rickshaw-driver helped me back onto the rickshaw. Instead of going to class at Chhayanaut, I went home to chop off my hair in a style that didn't suit me at all and annoyed my mother no end, but left my hair so short that no one could possibly grab hold of it again.
As a teenager, self-mutilation was my expression of frustration and anger at the apathy that surrounded me. No one really took this kind of harassment seriously. Boys will be boys, right? They were just looking and making remarks, and that's natural for boys. And for girls too -- to be ogled and teased. Sometimes things went a bit too far, and there would be groping involved.
But hey, girls weren't supposed to be in such places/situations by themselves anyway, right? Like that girl who was gang-molested on New Year's Eve at Dhaka University…what was she doing there at midnight anyway? And that girl Simi, who committed suicide because she couldn't take the teasing. Why was she out late, walking home by herself anyway? Or the Jahangirnagar girl who was harassed by friends of a boyfriend she'd broken up with. They had every right to do this…she had exhibited her loose morals by dating their friend, hadn't she? Or me, a glass of water poured on my feet as I waited for a bus; flashed by an elderly man as I walked to Holy Cross College; buttocks squeezed by unknown hands as I checked out books at Nilkhet.
I remember the Dhaka streets two decades ago, when I first started roaming the city. Women on foot, by themselves were a rarity; nice girls had chaperones and didn't traipse the streets by themselves. Coming from a rickshawless townlet, where one walked everywhere, I tried that out in Dhaka as well. I got stares bordering on the hostile, propositions from men who thought me a prostitute, and of course numerous comments.
And then the streets changed; the garments meye phenomenon occurred, and the bhodromohila barrier was overturned. The young girls banding together to avoid those same groping hands and invasive eyes on their way to and from their workplaces made us see and be seen; their slogged miles granted us visibility where almost none had existed.
At sixteen, I hacked off my braid (as if it was my hair that was at fault). Today I see not-particularly-religious girls wearing the borkha (for convenience, they say, and later, na apu, it really doesn't work), parents marrying them off young, while some commit suicide -- coping strategies of the powerless.
Today, I'm no longer powerless. The elderly bearded man who accosted me during my morning walk at Dhanmondi lake, claiming that I was "corrupting the young boys who came to exercise" because I was dressed obscenely (slacks, fotua, orna?), got such an earful that he never dared look me in the eyes again. The man I forced off the bus in the middle of nowhere on the Dhaka-Savar route will think twice before trying to grope another woman. What I'm telling these men is this; this is my turf, as much mine as yours.
When women are out on the street (and a lot of times even in their own homes), a hundred pairs of eyes violate us, a hundred pairs of hands grab at us. Catcalls poison our ears, obscene remarks ride roughshod over our sense of identity and place. And when these intrusions shake us into protest, then descends the gender-weighted sledgehammer of society/tradition. Who can break the bonds that make us hobble instead of run?
We all can; we all do. Women who walk to work, the factory-workers claiming the miles, mothers taking kids to school, women out shopping, morning walkers, women out for no reason, just because they feel like it, are all breaking the bonds. Men walk with us, beside us. Bit by bit, hard-fought inch by hard-fought inch, we're getting there, we're staking our claim.
Let's do it. Let's walk, let's run, let's fly. Let's take back our streets. Power to us.