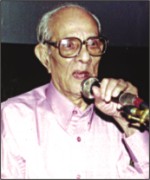 Veteran journalist Obaidul Haque was one of the pioneers among Bengali Muslims. He was the first Bengali Muslim to direct and produce a feature film prior to the Partition. He had been involved with the film industry as a director, producer, lyricist, playwright, film critic and film society activist.
Obaidul Haque's fondness for cinema developed through relentless movie-going in his youth. By 1945, the fondness became an obsession and he was off to Calcutta with 14,000 rupees in cash hoping to make a film based on a script written by him. Though he was confronted with obstacles -- his lack of experience in the details of filmmaking and the communal tension, he gradually succeeded in his endeavour and thus his first film Dukkhe Jader Jibon Gora was released.
Dukkhe Jader Jibon Gora, follows the ups and downs of a Hindu family during the famine in 1943. It was the first intervention by a Muslim filmmaker into the pre-Partition Bengal's highly distinguished film industry based in Calcutta that virtually excluded Bengali Muslims. Fateh Lohani, credited as 'Kiran Kumar', acted in the film and Abdul Ahad was the music director. Sukumar Das Gupta was to direct the film. After completing 14 percent of the film, he abandoned his job because of a dispute between him and Haque. The rest of the film was completed by Haque himself.
At that time, due to the mounting communal tension he was obliged to assume a 'Hindu name' -- Himadri Chowdhury -- included in the credits. Dukkhe Jader Jibon Gora was released in Calcutta on December 20, 1946. According to Alamgir Kabir the Calcutta-based distributor took full advantage of the volatile political atmosphere and managed to exploit Haque without paying him anything. Haque's personal investment in the project amounted to over 50,000 rupees.
Reflecting on the film Alamgir Kabir wrote, “I feel that Dukhey Jader Jibon Gora was not only a bold attempt but also a tremendously risky venture. Had it not been for family affluence of the director, the 'adventure' could have proved ruinous. But, then again, taking risks has always been the way with the pioneers.”
Obaidul Haque also established a film distribution house named 'Standard Films' and was a member of Bongiyo Chalachchitra Samity. He took initiatives to make a number of films in both Bangla and Hindi but the situation forced him to withdraw from the projects as the communal harmony was once again dismantled by the killing of Mahatma Gandhi. Haque returned to Dhaka.
In this part of Bengal, Haque directed Dui Diganto. Azan and Ontorongo are film adaptation of his stories. Haque continued his contribution to cinema in different roles -- as a member of National Film Award Committee, Censor Board, film grants and through film society activities.
Obaidul Haque passed away at his Banani residence on October 13 at the age of 96.