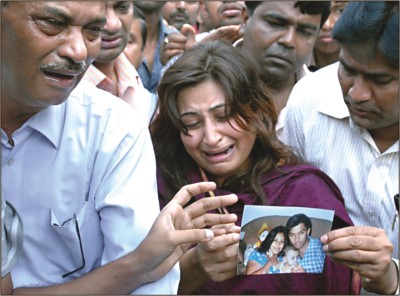 Wife of missing Captain Tanvir brought this photo to the BDR Gate-4 near Jigatola asking people to find her husband. Father, left, of Tanvir also breaks down in tears at the gate.Photo: Anisur Rahman

Major Mominul Islam and Soniya, a happy couple, had been longing for a child for seven years. Finally, their dream came true. They were expecting a baby by mid-March and bought all the necessaries for an infant. Unfortunately, Maj Mominul is missing since the Wednesday's BDR mutiny.
Soniya, a news presenter of Baishakhi TV, took a six-month leave aspiring for a healthy baby. She never knew, even in her wildest guess, that the baby would be born an orphan, growing up only with the pictures and stories of his/her father. She is now in immense shock.
Mominul's sister Noorjahan hoping for any information of her brother was found at the BDR Gate-4 around 4:00pm yesterday. She has lost the hope of her brother being alive and is now waiting for his body instead.
“Momin was very affectionate to children but he couldn't behold his baby's face,” said Noorjahan while tears rolled down from her eyes. “I have been to every possible places looking for Momin's body including Combined Military Hospital (CMH) and Mitford Hospital but got no trace of him,” she added.
Like Noorjahan hundreds of family members of the missing officials are waiting outside the BDR headquarters.
Pritam, elder son of Major Abdul Salam Khan, is another waiting with his mother and brother for his father's body. He was carrying his father's photograph to help the recovery team identify his father.
He, his mother and brother were held hostages in a guard quarters since the mutiny broke and were released on Thursday around 3:30pm, said Pritam, an HSC candidate of Notre Dame College.
Pritam only knows that his father was last seen in the Darbar Hall and missing ever since. Like others he had also been to CMH, DMCH and Mitford hospital and returned disappointed.
M A Hasan Babul, brother-in-law of BDR Director General (DG) Shakil Ahmed, was also found in front of the BDR Gate-4 with the deceased DG's mother and three sisters. They were all waiting to receive the DG and his wife's body till filing of the report at 4:00pm.