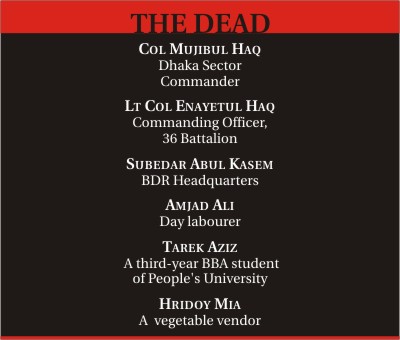 The mutiny sparked off at the Darbar Hall at the Pilkhana BDR Headquarters at 9:00am when rebellious jawans created a commotion while the Director General Major General Shakil Ahmed addressing a gathering of officers and lower tier personnel on the occasion of BDR week.
The Daily Star talked to one of the mutineers over mobile phone and took his version of how the mutiny began.
"The lower tier BDR personnel (recruited directly by the BDR authorities) have been demanding solution to a number of problems related to pay and benefits. These demands were raised before the DG so that he places them before the Prime Minister who came to Pilkhana yesterday (Tuesday) to inaugurate the BDR week," he said, wishing anonymity.
"The DG raised before the prime minister only two demands of the army officers in BDR but none of the demands of soldiers. This intensified our grievance."
When the jawans kept on arguing with the BDR DG, another group from behind shot at the dais, prompting his ADC (aide-de-camp) to fire back, a top official of a law-enforcing agency confided. "BDR DG was first to be shot at."
He said by Tuesday the angry jawans went out to print a leaflet headlined, 'Save BDR! Save the country! Save the Nation: why are 45,000 BDR personnel subservient today? The BDR is alien in its own home. Take a look, honourable prime minister, thinkers of the country.'
This leaflet was circulated among jawans and outsiders Tuesday night. Sources said there was a tension between officers and soldiers throughout the night.
During the heated argument, disgruntled jawans asked the DG about the profit made during the Dal-Bhaat programme. They said after the programme ended, they were told that they would receive bonuses from the profit. Accordingly they had put their signatures on money receipts, but never got the money, claimed the mutineer.
A source in the army told The Daily Star said the jawans appeared to have been wel-orchestrated.
He however declined to say how many officers were killed or injured or how many of them were held hostage. "You will get to know that in due time," he added.
Army officers told The Daily Star that they received calls between 9:00am and 10:00am from some of the BDR officials held hostage at Pilkhana who pleaded for immediate action to rescue them. After that they did not receive any call from the BDR officials. When they called back they found the BDR officials' mobile phones switched off or they did not respond to their calls.
Over 3,300 soldiers belonging to battalions 24, 36, 13 and 44 in Dhaka took part in the mutiny. Besides, 3,000 more soldiers of various battalions in the country who came to Pilkhana on the occasion of the BDR week also participated in it. "As a result, we faced no opposition while launching the mutiny," he pointed out.
The BDR has 40,000 soldiers in 46 battalions, each having 826 soldiers, in the country. The number of officers in BDR is between 250 and 300, he added.
Unofficial sources claimed that at least half of around 6,000 soldiers opposed the mutiny. Many of them were killed along with the officers but it could not be confirmed. Some of them fled Pilkhana as soon as they saw the officers getting killed, unconfirmed sources said. The bodies of the slain people were dumped into various manholes at Pilkhana.
Asked if there was no opposition, why did the mutineers fire so many shots throughout the day, the mutineer said over the phone, "Just to make sure that nobody tries to enter Pilkhana from outside and foil our effort." Most of those were not aimed at any particular target.
He claimed that the mutiny was not a culmination of a thought-out plan hatched over a long period of time. "We did it almost suddenly," he claimed.
"Those who took part in it are sepoys, nayeks, lance nayeks, havildars and JCOs," he added.
MUTINEERS TELL OF PENT-UP FURY
The BDR mutineers claim the mutiny was not culmination of any long-term plan, rather results of long-repressed feelings of being deprived of financial and other in-service benefits and being ignored by the authorities.
Speaking anonymously to The Daily Star over phone, a mutineer accused his senior officials of enjoying all benefits.
"I get only Tk 5,000 which is not enough to cover my monthly expenses. We are given 60 percent ration supplies for our children below 12. We have been demanding 100 percent ration as we cannot afford to buy the remaining 40 percent from the general shops."
He claims the residential facilities for the lower-level personnel are very poor, while not only the officers enjoy good facilities, their families also enjoy the same when they go abroad on UN Peace Mission.
BDR lower-level personnel are also deprived of the opportunity to join the UN missions and are deprived of the opportunity.
It was not possible for The Daily Star to avail the version of the BDR officers on the mutiny till filing of the report last night.
During the BNP rule between 1991 and 1996, the BDR lower tier staged mutinies in Dhaka, Chittagong, Feni, Jessore, Khulna and Naogaon expressing similar grievances.
Those mutinies did not witness bloodshed and the personnel were assured of measures to address their issues, which were ultimately shelved.