A tribute to a non-conformist 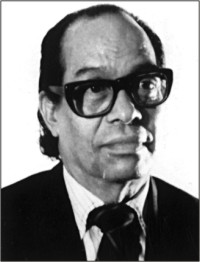 DR. Ahmed Sharif, the legendary figure of free thought movements of the country, died on February 24, 1999. He was born on February 13, 1921.
He was a rational humanist, who left behind a legacy for those fighting fascist ideas, autocratic views, communalism and superstition. Whatever he said or wrote caused a lot of furore in intellectual circles. He had been living a secluded life to avoid the wrath of a section of the public who thought his views to be too dangerous for the establishment.
He was a controversial and misunderstood personality among his contemporaries. He was controversial because of his outspoken views against the establishment, intellectuals and political leaders, and above all religious and parochial outlooks.
He was misunderstood because he was always reluctant to be associated with government agencies. Moreover, he was often black-listed from the national media.
Dr. Sharif was from Patiya, Chittagong, and did his Masters and Ph. D in Bangla literature from Dhaka University in1944 and 1967, respectively. From 1945 to 1949, he taught at Laksham Nawab Faizunnessa College and later on at Feni College.
He was program assistant at the Dhaka Centre of Radio Pakistan in 1949-50. He joined as Research Assistant in the Bengali Department, Dhaka University in 1950, and retired as Chairman and Professor in 1983.
He was elected a member of the Senate and Syndicate, and was president of the Teachers' Association and the University Teachers Club. He is the only person who was elected the Dean of the Faculty of Arts for three consecutive terms. After his retirement from Dhaka University, he joined as the first "Kazi Nazrul Islam Professor" at Chittagong University, where he served from 1984 to 1986.
He received many honours and awards for his outstanding contributions in medieval Bengali literature and contemporary socio-cultural-political essays. A major recognition came from the Rabindra Bharati University, India, which conferred upon him Doctor of Literature title in 1995 for his outstanding contribution to Bengali literature. He was invited to deliver many commemorative and institutional lectures.
Dr. Sharif was the lone authority on ancient and medieval Bengali literature, and was author of more than 100 research publications. He edited 46 manuscripts of ancient and medieval Bengali literature, and a lot of others in joint collaboration. Two volumes of his Bangalee and Bangla Shahitya (Men and Literature of Bengal), published between 1978 and 1983, are masterpieces according to sub-continental scholars.
Never did he care for appreciation or publicity for his scholarly works. Although many so-called liberal democrats and secular intellectuals of the country denied his scholarly contributions and suppressed his free thoughts, no one has ever questioned his intellectual honesty.
However, many believe that one of his major achievements was that, unlike many of his contemporary scholars and academicians, he was able to negate the hatred and enmity of reactionary forces by the bold expression of his own views. The late scholar was universally highly regarded for his ability to say "no" to various material temptations; his dignity and self respect never permitted him to be complaint and submissive to power.
He was considered an impractical man, seized with radical ideas but never "clever" enough to understand his own mundane interests as he never took any advantage of his scholarship position nor wield his influence to become wealthy, famous and powerful.
Dr. Sharif never compromised, and held on to whatever he thought right through to the end; he rose above all dogmatic and parochial outlooks towards life. For his brave statements against communalism, superstition, autocracy and fascism, his life came under threat many times, but he didn't care. He was an institution for people a with rational outlook, and his school of free thought influenced many youths of the country for almost half a century.
Those who came across him, either at the adda at Suhrawardy Uddayn or at his Shukkurbare Adda (Friday gathering), specially the young who took part in the weekly discussion at his residence on issues ranging from the ideal way of social life to modern theories of literature, philosophy and contemporary politics, certainly developed a talent for provocative one-liners on virtually everything, starting form imperialism, fascism, racism, culture, religion and Marxism.
As a teacher he taught his pupils to think and honing of the intellect was his prime concern, not for his own sake but in order to live life more meaningfully, for the good of all.
He will be remembered for his ideas and modern outlook, and also for the donation of his eyes and body for the benefit of mankind. All this will encourage the liberal democrats and progressive forces, and his massive scholarly contribution will enrich and help the researchers of Bengali literature throughout this century.