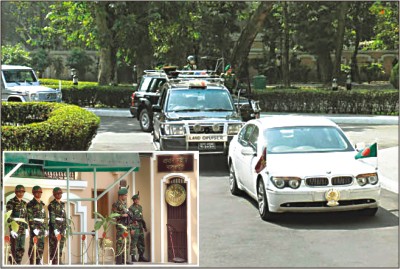 The government a couple of days ago received information from different international intelligence agencies that Prime Minister Sheikh Hasina's life is under threat from international terrorist organisations who are in league with local extremist groups.
Two ministers and intelligence sources told The Daily Star yesterday that they received information that the month of February is especially crucial.
Following the threat alert, all scheduled outdoor programmes of the prime minister were immediately curtailed.
The international intelligence sources informed Commerce Minister Faruk Khan and Foreign Minister Dipu Moni about the threat. Upon receiving the information from the US, United Arab Emirates, and Pakistan, security of the prime minister were immediately strengthened, sources close to Hasina said.
"She is a target, and there is no doubt about it," a senior official of a domestic intelligence agency said.
The official, who is involved in anti-terrorism work, said security of the prime minister will be rearranged soon, and some sophisticated security apparatus will be incorporated, especially for occasions when she will be attending outdoor events.
State Minister for Home Affairs Tanjim Ahmed Sohel Taj said they are assessing the intelligence about the threat, and are taking measures to ensure a foolproof security for the prime minister.
"We are always alert, since attempts were made on her life in the past," Sohel Taj said during a telephone interview with The Daily Star last night.
Meanwhile, Hasina and her family yesterday moved into the state guest house, Jamuna, from her Sudha Sadan residence in Dhanmondi, which was being considered unsafe for her by her security officials since her party's landslide victory in the recent parliamentary election held on December 29 last year.
Sources said the prime minister will be staying in the Jamuna for about six to seven months until the Gono Bhaban is renovated and readied for her use.
Security officials, especially of the Special Security Forces (SSF), which is responsible for the security of the prime minister, her family members, cabinet colleagues, and her party leaders, has been suggesting her not to stay in Sudha Sadan.
Government high officials said the fresh threat came after the Awami League-led government expedited its efforts to try the country's war criminals, which was one of the major election pledges of the prime minister's party.
"Trial of war criminals is our commitment to the nation, and it is also the people's expectation. The threat on the prime minister's life was issued after we had initiated the move to try the persons who had committed genocide in the country during the war of liberation in 1971," Faruk Khan said.
A section of Bangladesh Jamaat-e-Islami leaders, who are known to have been involved in war crimes during the liberation war, are also said to maintain close connections with Pakistan and some Middle Eastern countries.
Saying that attempts were made on Sheikh Hasina's life at least 21 times, Faruk Khan added, "We will foil any attempt on her life with the support of the people."
Hasina was warned by security and intelligence agencies of possible attempts on her life by Islamist terrorist groups including banned Harkat-ul-Jihad-al-Islami (HuJi), and Jama'atul Mujahideen Bangladesh (JMB), a couple of weeks ahead of the recent ninth parliamentary election as well.
Earlier, Indian intelligence agencies also informed Hasina that a suicide squad of a militant group, trained by an intelligence agency of a South Asian country, planned to assassinate her before the December 29, 2008 poll.
Sources said names of HuJi and JMB were categorically mentioned to Hasina as sources of the threats.
While HuJi was the one to make attempts on Sheikh Hasina's life before, JMB also poses danger to everyone and everything standing up for secularism and progressive ideals.