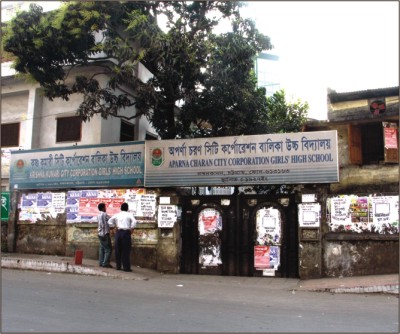 Chittagong City Corporation plans to bulldoze these two schools aged over 80 years and erect a 16-storey building, which will house the schools along with commercial establishments.Photo: STAR

Students and guardians of city's two reputed girls schools and civil society members expressed resentment at Chittagong City Corporation's (CCC) plan to demolish the schools and construct a 16-storey multi-purpose building to house the schools along with other commercial establishments.
The schools --Aparna Charan City Corporation Girls' High School and Krishna Kumari City Corporation Girls' High School --are over 80 years old and have over 2,000 students at present.
They say that the proposed construction of the building would destroy the academic environment of the schools that produced personalities like anti-British revolutionary Pritilata Waddedar (first headmistress of Aparna Charan School) and former Indian Congress president Neli Sen Gupta.
The buildings of the aging schools are in poor condition and they lack proper ventilation systems, which caused many students to faint inside classrooms in recent years.
Responding to an appeal of the school authorities, the caretaker government last year took the initiative to construct two six-storey buildings for the schools. Chittagong Development Authority (CDA) also prepared a project outline for this. The Education Engineering Department (EED) was supposed to implement the project.
Everything was going smoothly as Executive Committee of National Economic Council (Ecnec) approved Tk 6 crore for the project and the EED was about to implement the project.
But CCC Mayor ABM Mohiuddin Chowdhury, taking charge after his release from jail, refused to take the allocation and declined to go for the reconstruction of the school buildings.
On December 28, he sent another proposal, signed by CCC Chief Engineer Md Nizam Uddin, to the CDA chairman seeking approval for the 16-storey multi-purpose building that would house the schools along with commercial establishments.
The move shocked students, guardians and civil society members.
According to the CCC proposal, the third, fourth and the fifth floors would be given to the schools while the rest of the floors including the two basement floors would be left for commercial establishments.
The CDA refused to approve the design saying no market could be allowed to be built on the land of two reputed schools.
CCC Urban Planner Rezaul Karim claimed that the CCC design concentrated on giving more space to the schools.
Talking to The Daily Star Wednesday, he said the CCC has the authority to construct the building even if the CDA disapproves of the plan.
The CCC chief engineer, however, refused to give details on the matter.
With the school authorities kept mum by the CCC, civil society members and guardians continued to express resentment at the CCC plan and held demonstrations protesting the CCC move.
Five eminent personalities--noted scientist Jamal Nazrul Islam, Bangladesh Economic Society Chittagong chapter President Prof Md Sikander Khan, architect Zarina Hossain, engineer Subhash Barua and environmentalist Shahriar Khaled--in a joint statement Tuesday demanded an immediate step against the CCC move to construct a commercial building demolishing the historic schools.
In the statement, they termed the CCC move antagonistic to national interest.
Meanwhile, Forum for Planned Chittagong, a Chittagong-based organisation, termed the CCC act immoral.
Samajtantrik Chhatra Front Chittagong city unit formed a human chain and staged a protest rally in front of the schools Wednesday afternoon.
Women leader Mostari Shafi said all should come forward to protect the schools that bear the memory of hero Pritilata.
Tabassum Akhter, mother of a class-VII student of Aparna Charan School, said it is nothing but an attempt to dismantle the reputed schools.
How could the CCC mayor expect students to study having business activities all around them, said another guardian Maya Dutta.
"How would all the students of the schools leave and enter the building without using any staircase at the start and end of classes?" said Bakul Roy, a guardian, adding that she would move her daughter to another school if the CCC succeeded with its plan.
The schools produced people like noted writer Fahmida Amin, Prof Salma Khan, Prof Nazma Siddiqua, Prof Maleka Azim Khan, Prof Roushan Akhter Hanif, Prof Rita Dutta, Prof Hanna Begum, Dr Joynab Begum and Dr Tamanna Jafar.