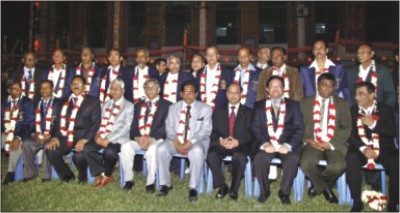 SALUTE WAR HEROES: Chief of Army Staff General Moeen U Ahmed (sitting fourth from R) poses for photographs with the members of the Swadhin Bangla Football Dal during a reception at the Bangladesh Football Federation Bhaban yesterday. Photo: STAR

Thirty-seven years after the Liberation War, country's football war heroes finally got due respect from the Bangladesh Football Federation (BFF) yesterday.
Although the members of the Swadhin Bangla Football Dal (SBFD) received accolades and receptions from various organisations in the past for their great contribution, the BFF had never come forward to pay homage to the footballers, who played across India in 1971 to create public opinion and raise fund for the War of Independence.
Ironically, the BFF arranged the reception at a time when Kazi Salahuddin -- who refused the lure of an animated life in England then to be a part of that glorious chapter of our football history -- is its president.
As BFF president, everyone expected the country's greatest footballer --arguably -- to be on stage last night but Salahuddin chose to sit with his comrades and take certificate and crest like the others from Chief of Army Staff General Moeen U Ahmed, who graced the programme at the ground adjacent to the BFF Bhaban as chief guest.
General Moeen, also the chairman of National Sports Council (NSC) and president of Bangladesh Olympic Association (BOA), earlier unveiled a plaque dedicated to the SBFD at the BFF Bhaban premises.
"I am proud that the sportsmen of the country were not behind during the Liberation War. They fought on their own frontier and raised 3.5 lakh Rupees for the fund of the government. They also won, a great 12 matches," Moeen said in his speech.
Moeen also announced that the NSC will resume pension of the footballers from this month. It is mentionable that the NSC had stopped the monthly Tk 3,000 pension for the members of the SBFD.
"The wives of those who have passed way will get the benefits if they want," he added.
Special guest Ananda Rajah Singham, Head of Marketing of BFF sponsor Citycell, said that the deed of the footballers is an inspiration for the country's youth. "Standing on the shoulders of the giants, Bangladesh will one day play in the World Cup football," he hoped.
BFF senior vice-president Abdus Salam Murshedi acknowledged the contribution of the footballers saying that they did a great job by letting the world know about the people's struggle for freedom.
"They had great contribution to the war and gave us inspiration to win," said former national striker Salam.
Tanvir Mazhar Tanna, manager of the Dal, informed that they had played 16 matches and ended their journey in Mumbai, where former Indian cricket captain Mansoor Ali Khan Pataudi captained the Maharashtra football team.
"Many players of the Sawdhin Bangla Dal were playing for Pakistan then. The Pakistanis wanted to involve them in a match in Dhaka to show the world that life was normal here," told Tanna.
"Then we contacted the Mujibnagar government to do something about it. In time, 100 to 150 men joined our camp. There were other sportsmen with us like Roquibul Hassan (ex-Bangladesh cricket captain), Arun Nandi (late swimmer) and Ataul Haque Mullick (late sportsperson and sports journalist). The money we raised went to the government fund. The players received a meagre Tk 3 per week.
"A Bangladesh Krira Samity was formed but people have forgotten about it. I wish it got recognition today, like we did 37 years ago by playing football."
Captain of SBFD Zakaria Pintoo in his emotional speech thanked everybody around for giving the footballers due respect.
"Many have left us, some are living abroad, I feel their absence from the bottom of my heart. I remember the day July 24, 1971 fondly. That day, we hoisted the flag of the nation at the Krishnanagar Stadium in Nadia district," told Pintoo.
"We were yet to get recognition as a country then but all the players kissed the national flag before the match. When the local organisers said that the Indian flag could not be hoisted due to reasons, it hurt. We refused to play but the district administrator DK Ghosh risked his job by hoisting the Indian flag beside the red, green and yellow of Bangladesh.
"Hats off to Ghosh, who was invited but could not join us here today due unavoidable reasons.
"We are part of history and I have tried all my life to let the people know what we had done."
Among the 36 members, 23 were present while family members of some of the deceased and those who are abroad, received certificates and crests.
The programme should have been more colourful but mismanagement was written all over it. The BFF should think about finding someone new to handle such occasions instead of giving responsibility to a familiar face, who always brings cheap entertainment. The crowd was even unhappy about the young group that performed the national anthem with poor tunes on the background.
The show was rounded off with a cultural function and a concert starring freedom fighter and pop singer Azam Khan and Ayub Bachchu.