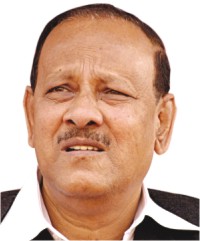 Former BNP secretary general Abdul Mannan Bhuiyan yesterday said he would join the government party if he is elected from Narsingdi-3 constituency.
"I'll join the government party whichever comes to power on condition that the ideology should be similar," Bhuiyan told The Daily Star after casting his vote at his own Chowghouria village in Shibpur upazila of the district.
He said he is very hopeful about his win. Out of the total 200,481 voters, 104,284 are female and 96,197 are male in the parliamentary seat (Shibpur).
Awami League-led grand alliance candidate Zahirul Huq Mohon and BNP-led four-party alliance candidate Tofazzal Hossain Master are the main rivals of Mannan Bhuiyan.
Bhuiyan said he would accept whatever the result of the elections as the polls were being held peacefully and impartially.
Mohon also said he did not find any kind of untoward incident at any polling centre as the polling was held peacefully. He will accept the polls result.
He, however, complained that the pace of voting is very slow, as most of the voters are not habituated with the new system of casting vote.
SM Saidur Rahman, presiding officer of Mannan Bhuiyan's polling centre, said he did not face any kind of threat or influence from any quarter during the polls.
Polling in other constituencies like Narsingdi-1, 2, 4 and 5 was also held peacefully as there was no report of any untoward incident.
In 2001 elections, BNP got four seats while AL one out of five constituencies under Narsingdi district.