A passion for notes and sounds 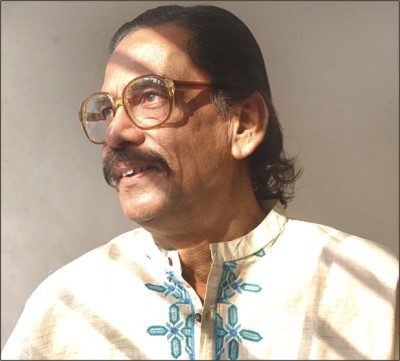 A talented composer, a trendsetter, and an instrumentalist: simply put -- a gem in the field of music. Yes, we are talking about the reputed music director and composer Alam Khan.
With his immense passion for musical notes and sounds, Khan has managed to let soulful music glide into our lives. So what made him fall in love with music? “I have never dwelt on this question before, but now that you ask me, I think I was always in love with music,” recalls Khan.
Reminiscing on his childhood days, he continues, “I was drawn to different sorts of cultural programmes since I was just six or seven. Every year after my annual exam and during my winter vacation I used to visit my maternal and paternal grandfather's house in the villages of Sirajganj and Tangail. There I'd witness a variety of cultural activities like 'jatra,' 'pala gaan' and what not. I should also mention a neighbour of mine called Ratan bhai, when we lived in Azimpur colony. He had a selection of instruments. I used to go to his house almost every day just to watch him rehearse. Ratan somehow understood how much I adored music and started teaching me. So you may say that he was my first guru. Then there was a street musician named Altaf. He was my pied piper of Hamelin as I used to follow him everywhere, entranced by his music.”
Later on in life, Alam Khan took lessons from professional and renowned artistes like Nani Chaterjee and Karim Shahabuddin. Khan along with his friends also formed an orchestra group called the “Ritu Orchestra Group”.
Did fame knock on his door from that moment onwards? Smiling, the renowned music director continues, “I auditioned on TV and radio and got rejected, security refused to let me in at FDC the first time. I got my first break in a stage play called "Bharate Bari," then I did some music direction for TV and finally films. The first film featuring music by me was 'Kaanch Kata Heerey' and then, as they say, the rest is history.”
Some of his personal favourites are "Orey neel doriya," "Ami rajanigandha," "Daak diachhe Doyal amarey" and "Tumi jekhaney ami shekhaney." His upcoming projects include music for movies -- "Eki Jadu Korila" and "Ek Buk Bhalobasha," which were released this Eid. Alam Khan has managed to surpass everyone in terms of versatility and his music has left a magical impression on people of all ages and eras. His creations are a perfect blend of vitality and rhythmic serenity, truly reflecting his modest personality. He has composed around 2000 songs and provided music direction to around 300 films. Alam Khan can be credited for giving the audience something new all the time.
The writer is a freelance contributor