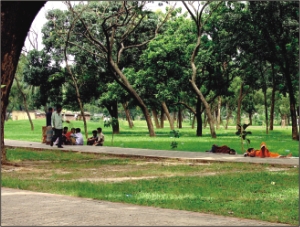 Vagabonds and anti-social elements still while away their time at the Osmani Udyan.Photo: STAR

Despite a number of steps taken to improve the environment of Osmani Udyan, one of the last remaining open spaces in the city, the historical park situated on 23 acres of land is not yet fully safe and secure for the visitors.
Vagabonds and floating people were evicted from the park by the Dhaka City Corporation (DCC) but they were back again after a year of the eviction.
DCC constructed a concrete wall around the park to prevent floating people from entering there. But still they are infiltrating into the park and residing there at night.
"There is a boundary wall but it does not ward off floating people. They come toppling the wall at night. Besides, there are prostitutes. Strong police guard is needed to stop them," said a security guard of a private construction firm engaged in the beautification of the park. His duty is only at night. DCC has no security personnel to guard the park.
"However, the environment of the park is better now after the authorities removed the railway colony a few days ago," said the security guard.
In spite of these complaints Osmani Udyan still is a place where people, mostly from old Dhaka, come to breathe fresh air.
On a visit to the park last week this correspondent found people sitting by the pond inside the park. Some were taking a stroll. Some people were taking a bath in it.
A scantily clad demented person was seen roaming freely. Some people were found relieving themselves near the trunk of a big tree beside the pond.
"When I came to this city last week I felt like entering a concrete jungle. I have found very few open spaces. But this is a wonderful place for roaming," said Anisur Rahman, a villager visiting a relative's house in old Dhaka.
"This is a breathing place in old Dhaka. Often I come here for a stroll," said Shahidul Alam, a resident of Siddiqbazar. "The environment of the park has improved but still beggars and addicts roam inside it. I cannot think of entering the park at night."
Dhaka City Corporation is implementing a beautification project for the park. The first phase of the project was completed in September 2006 at a cost of Tk 2.93 crore. The second phase costing Tk 3.40 crore is going on.
In the first phase DCC fenced the park with a combination of concrete wall, iron grilles and shrubs. A 2-km walkway and an artificial lake were made in the park.
The second phase includes landscaping, walkways, planting grass, ornamental trees and big trees, making flower beds, installation of lights, drainage system, non-mechanised recreational toys and sand pit for children and a separate area for women. Except for ornamental trees and recreational toys all other works have been done.
There is a committee called Osmani Udyan development, beautification and modernisation advisory committee, which comprises representatives from the civil society, educationists and environmentalists. The committee submitted the plan of the project to DCC on September 25, 2004.
Prof Serajul Islam, member of the committee, said they have proposed to employ a group of local residents, players and joggers for the security and maintenance of the park.
"This is a social institution. So we proposed to form a volunteer group of locals for its maintenance," he said. "We also proposed to widen the lake towards the eastern boundary wall and planting big trees of local species," he added.
A decision was taken two and a half years ago to chop down 600 rain trees, 200 acacia and 70 eucalyptus trees as they are harmful to the soil and groundwater. These were imported and planted during the rule of Ershad. Around 86 rain trees have been felled later.
"Replacing these trees we have been planting local environment-friendly trees like arjun, mahogany, banyan, bokul, kodom, teak, silk cotton, mango, jackfruit and coconut over the last one year," said Abul Hasnat, executive engineer, zone 5, DCC.
"At present our aim is to make the park greener. We have planted 1,350 trees in our own initiatives and HSBC donated 1,000 more trees, which were also planted," he said.
At present 12 gardeners of DCC work at the park.
Hasnat said in the morning the vagabonds do not get the chance to enter the park as DCC people are deployed there. But they start to infiltrate into the park in the afternoon.
"Presence of the police in front of the park does not help at all. They do not take the trouble of warding off vagabonds. Once a DCC gardener was seriously injured by the floating people. We lodged a complaint with the Shahbagh Police Station," he said.
Several acres of land of the park have been under occupation by different groups for the last two decades. Among them are Pir Yameni Market, Muktijoddha Sangsad club, a Wasa pump house, Golap Shah Mosque, an air-conditioning plant of Osmani Memorial Hall and a 20-feet road to the police barrack, said sources at DCC.
"They have some sort of permission from the DCC but we should free the park from these installations," he said.