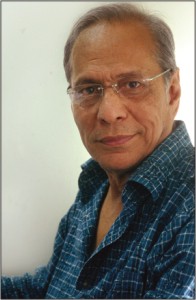 He is one of the most experienced TV officials in the country. Joining the then Pakistan TV's Dhaka wing as a producer in 1967, Mustafa Kamal Syed had Mustafizur Rahman, the late Abdullah Yusuf Imam and Badrunnesa Abdullah as his colleagues. Throughout his career, he has worked as a Programme Manager; General Manager; Director, International Relations and Deputy Director General, Programme. In 2004 he retired from BTV and joined satellite TV channel ntv as its Chief of Programme. The media personality recently shared his views on gradual changes in the TV industry and more with The Daily Star.
"Revenue wise, TV plays are the most popular programmes," says Syed. Kul Nai Kinar Nai -- a two-hour-long play adapted by Momtazuddin Ahmed from a novel -- produced by Syed and featuring Subarna Mustafa, Afzal Hossain and Asaduzzaman Noor in the lead roles attained major popularity in the mid '80s. The play was aired on NHK's Channel-3 Network (Japan) in 1988 (as part of the Asian Drama Festival) and received accolades. It was also aired on CCTV (china) as part of a cultural exchange programme. Among his favourite TV productions are Mukhora Ramani Bashikaran and Raktokarobi (produced by Mustafa Monwar) and Borof Gola Nadi (by Abdullah Al Mamun).
What are the key elements that make a TV play successful? Syed's response: "A bold script and a relevant social message. As a producer I feel that an effective play should have a message. On that note, I think negative messages should not be conveyed in TV programmes. As a mass media, television has a major impact on impressionable young minds.”
Though Syed has been lauded as a TV play producer, the early years of his career were marked by his accomplishment as a music producer. He was the producer of a widely watched musical programme, Sur Bitan that was aired every Sunday in the '70s. Mega-popular songs like Sagorer teer thekay, Jey chhilo drishtir shimanaye, Ekbar jetey dena, Khola janalaye and Amaye jodi proshno korey were aired first on the show. Mustafa recalls discussing the ideas with the lyricists and composers. "That's the only way to work when producing musical programmes are concerned," he says.
A memorable experience: "There were many limitations back in the day. To begin with, programmes were aired live from the DIT studio and there was a 25-minute prep-time. Everything -- set, lights, musicians, and artistes -- had to be ready in that time. These programmes were quarter-based (three months). In the next quarter, the then programme manager told me that the prep-time will be cut down to five minutes. I couldn't believe what I was hearing but apparently the decision had been made. We'd get just five minutes to get everything ready and air the programme live under the new circumstances for the next three months.
"It was a challenge and we all geared up to the best of our ability. Keramat Mawla was the set designer. There was a long veranda next to the stage at the DIT studio. Keramat was asked to get the set ready at the veranda. There was no time for rehearsal. Some of the most popular and respected artistes like Feroza Begum, Sanjida Khatun, Mahmudunnabi, Ferdausi Rahman, Syed Abdul Hadi, Shahanaz Rahmatullah and Sabina Yasmin worked without any complaint. The crew managed to pull it off. Maybe no one would believe this now because this attitude is rare these days. That kind of dedication, teamwork and commitment are dwindling. Most want a shortcut."
"The again, technology has advanced and modern equipments take longer to tune and adjust," says Syed. Delving further into the differences, he says, "When we started working in TV, we couldn't shoot outdoors. Editing was linear, meaning if we wanted to change something we had to start from scratch again. Now this is not an issue."
Many who grew up watching TV serials and plays in the '70 and '80s complain that these programmes do not enjoy the same level of popularity now. Addressing this issue, Syed says, "The problem with contemporary serials is that often they don't progress. Also options are limited within the same group of actors. So, you have over-exposure and repetition at times."
"However, there is a positive aspect of this. Opportunities have increased with exposure. Now young individuals can seriously consider a fulltime career in media. TVCs (TV commercials) have also become a major factor. If serials and plays were not popular, we wouldn't have to bear with the repeated complaints from the audience that there are way too many commercial breaks. Talk shows are catching on too," he adds.
Word of advice for young directors: "There is no lack of talent. But young makers often struggle with values and propriety. It is up to the seniors to guide them. One must not forget that there should never be editorial autonomy without responsibility or freedom without restraint.”