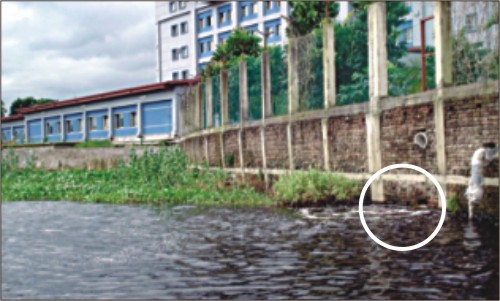 An almost invisible pipe releases industrial waste into a water body and the waste eventually ends up in the nearby Bangshai river through several beels and farmlands. The waste turns the water dark and fills the air with overwhelming stench.Photo: STAR

A garment factory in Gorai industrial area of Mirzapur upazila in Tangail is reportedly releasing untreated liquid waste into nearby water bodies and thus polluting croplands and the Bangshai river.
Locals blame Comfit Composite Neat Ltd, which has been dumping waste in the adjacent areas since the start of its operation, for the spread of skin diseases among people in the area, low yield from farmland and poor fishing in the Bangshai.
About 100 small and large factories are in Gorai industrial area and locals alleged that the factories have effluent treatment plants (ETP) installed but they do not use them all the time to cut operation cost of the factories. They say a large number of factories are polluting the environment defying laws protecting the environment.
The Daily Star correspondent saw at least three pipes laid through the Comfit Composite Neat Ltd walls dump liquid waste of the plant into a nearby water body. The factory dumps red liquid waste using two pipes and this waste has an overwhelming stench. From another side of the factory black liquid waste with small pieces of fabrics is drained away.
Locals claim the factory wastes end up into the nearby Bangshai river during the wet season before polluting several adjacent water bodies including Doha Beel, Chhaer Beel, Khaer Beel and Boro Beel. During the dry season the wastes go straight to the Bangshai through a six-foot-wide drain, they said.
Millat Hossain, manager of the Comfit Composite Neat Ltd, refused to talk about the allegations but told The Daily Star that the factory has a waste treatment plant installed since the start of its operation.
"The treated wastes released from the factory are not harmful for environment or human health," he said.
However, a workers' union leader told The Daily Star that most of the factories do not operate their ETPs all the time to cut cost. Sources in the agriculture department say that the factories hardly ever use the ETPs and most of the ETPs are there just to show authorities concerned that they have installed them and are using them.
A number of fishermen of the area claim the fish resources have almost been depleted in most of the water bodies in Gorai industrial area and the Bangshai river due to water pollution by a number of large factories.
The locals complained about the pollution to Gorai union parishad Chairman Mir Enayet Hossain Montu and Sutrapur union parishad Chairman Farhad Hossain but the two failed to resolve the matter.
The local administration cannot take action against the authorities of the factories for polluting the environment as the factories have "managed" papers from the Directorate of Environment, sources in the upazila administration said.
Mirzapur Upazila Agriculture Officer Mohammad Khasru Miah said factory wastes can seriously damage crops.
Residents of the adjacent Dariapur village say that they are only able to grow Boro in the area as most of the farmland is inundated half the year. They claim the waste make their land less fertile yielding almost half they did only a few years ago when the factories were not there.
Farmer Altaf Hossain, 45, of the village said the stem of the paddy gets damaged by the polluted water and they break before maturing.
Hasna Begum, 30, of nearby Ranar Chala village told The Daily Star correspondent that diseases including skin diseases are alarmingly spreading in villages as they use the water of the Bangshai. She said the water level of the river drops in the dry season and it gets polluted the most then.