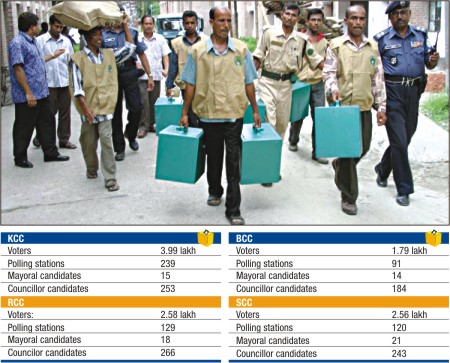 Four city corporations and nine municipalities go to polls today with the emergency power rules (EPR) back in full force.
The first elections under the present military-backed caretaker administration, these are considered crucial to determining whether the all-important parliamentary polls too will be held under the state of emergency.
Earlier at midnight Saturday, relaxation of the emergency curbs in election areas ceased to be in effect with the cessation of electioneering.
Chief Election Commissioner (CEC) ATM Shamsul Huda yesterday said the emergency rules being in place will not cause any obstacle to polling.
“It will instead complement the three-tier security in place for a peaceful conduct of the polls,” he added, talking to reporters at his office.
On June 20, the EC announced the polls schedules while the government relaxed the EPR to allow processions and rallies for election campaigns.
According to the electoral rules, the time limit for electioneering that began on July 14 ended 32 hours before the polling opens at eight this morning.
Talking to The Daily Star, noted jurist Shahdeen Malik said the EPR have got back to full mode automatically with the end of campaigning.
“And that is why the government did not need to issue any circular withdrawing the relaxation of emergency rules,” he added.
Against the backdrop of a debate whether a free and fair election is possible under the state of emergency, Chief Adviser Fakhruddin Ahmed has recently said the EPR would be eased further for the local government polls.
Contacted, the home ministry officials however said they were not aware of any such plan.
While some 1,600 contestants enjoyed full freedom in canvassing over the last 20 days, there will be no let-up in the emergency reins for the 13.66 lakh voters.
In fact, they will go to polling stations with fundamental rights like freedom of movement, of thought and conscience, and of speech suspended for the state of emergency.
Besides, the strict electoral rules will not allow any rallies or processions till August 7, meaning winners will not be able to do much in victory celebration.
EC sources said the commission wanted the EPR to stay slackened until gazettes of the election results are published, but the government did not agree.
Over 5,500 local and international observers will monitor the polls, widely considered a test for the EC's preparations for the general election planned to be held in the third week of December.
Political parties have long been demanding a complete withdrawal of the state of emergency before the parliamentary polls.
CEC Huda yesterday expressed satisfaction with the overall election atmosphere, which he said is much better than in previous times.
He said the contestants did not face any difficulties campaigning because of the relaxed state of emergency.
“We hope the polls will be free and fair, and voters will elect honest and competent persons,” he said, adding that these polls will help the efforts to change the election culture for the better.
The CEC will visit Manikganj municipality to observe polling there. Another election commissioner Muhammed Sohul Hussain was already in Sylhet.
Around 20,000 police and Ansar members have been deployed across four city corporations and nine municipalities so there is no obstruction in polling scheduled to continue without break till 4:00pm.
Besides, a special strike force and mobile teams of police, Rab and Ansar will work to ensure security. They will be on election duty through August 7.
Of 715 polling stations, 579 are for city corporations and the rest for municipalities.
The authorities have identified 283 polling stations, mostly in the city areas, as vulnerable in terms of security. According to the arrangements, at least 30 law enforcers will be on duty at each of those.
The stationary force yesterday completed taking position at the polling stations.
The number of voters in four city corporations is over 10.93 lakh while that in nine municipalities is over 2.73 lakh.
Forty-six candidates are vying for four mayoral posts, 752 for 118 councillorship, and 194 for 39 councillor posts reserved for women in Rajshahi, Khulna, Barisal and Sylhet city corporations.
Fifty-nine persons are competing for mayoral posts, 429 for 81 councillor posts, and 120 for 27 reserved women seats in Naohata, Dupchanchia, Chuadanga, Sreepur, Manikganj, Fulbaria, Shariatpur, Golapganj and Sitakunda municipalities.