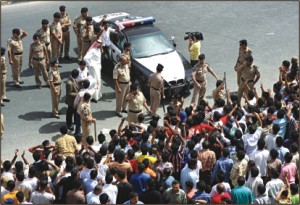 Kuwaiti Police yesterday arrested some Bangladeshi workers after they went on a rampage while protesting low wages, poor working conditions and other exploitations over the last couple of days.
According to the Arab Times, about 2,000 Bangladeshi workers, employed by Al-Jawhara Company for Stevedoring and Cleaning in Hassawi in Kuwait, destroyed six vehicles and injured five camp officials on Sunday.
The protesting workers also attacked the company office in Jleeb Al-Shyoukh on Saturday evening.
Police finally brought the situation under control, clubbing the demonstrating workers, reported AFP.
Shahriar Kader Siddiky, labour counsellor of Bangladesh Embassy in Kuwait told The Daily Star yesterday, "I have received reports that special forces of Kuwaiti police have made some arrests. "
He was not able to say how many had been arrested.
Thousands of cleaning workers employed by some 15 to 20 companies and assigned jobs under various government projects in Kuwait have been protesting for the last few days. The protests turned violent Sunday with a few groups of workers turning violent.
Siddiky said, "Officials of Kuwait's labour ministry have agreed to most of the demands by the workers, including fixing the minimum wage at 40 Kuwait Dinars (KD) per month. Some workers are now demanding that the company owners give this in writing," Siddiky said.
It has been reported lately that the ministry would send inspectors to labour camps to take stock of workers' living conditions and address their grievances.
Meanwhile Foreign Adviser Iftekhar Ahmed Chowdhury yesterday met with the Kuwaiti envoy to Dhaka Abdullatif Ali Al-Mawash and discussed the issue of the protesting Bangladeshi workers.
Iftekhar later told the press that Bangladesh and Kuwait are friendly countries and should be able to address issues of mutual interest amicably.
The workers have been complaining against poor wages, poor working conditions, overtime without pay, lack of sick leave and vacations, etc. The workers also claim that employers force workers to pay extra for health and residency -- costs they say should be borne by the companies.
According to the Arab Times, workers reportedly damaged furniture, computers, printers and other office equipment. Jleeb Al-Shyoukh is home to thousands of Bangladeshi cleaners, who live in squalid camps and most get paid as low as KD 18 a month (1 dinar = Tk 258).
A worker told the Arab Times that anger among the workers has been simmering for a long a time now. The workers had earlier warned the five supervisors working against their interests.
The scuffle occurred when some workers confronted the supervisors as to why certain deductions were being made from their already low wages. The supervisors reportedly threatened the cleaners.
Another worker said that they had taken their problems and demands to the company but it had all fallen on deaf ears.
“We know it is wrong to take the law in our hands but our situation is worsening by the day,” he said.
Al-Jawhara company's operations manager K John said that the government is partly to be blamed for the low wage situation, Arab Times reported.
“The workers demand health insurance, which is KD 50 per person, while it is only KD 10 for domestic maids. This makes it difficult for companies to provide it," John said.
“The municipality itself pays around KD 23 per cleaner, and the government can't expect us to pay more than that. Our workers receive anywhere between KD 20 and KD 70.”
John said that work tender is another complication where small players make abysmally low quotes to win the tenders which messes up the quality of this sector, which also complicates the situation.
Other Bangladeshi workers employed in Kuwait have also been in the news recently for protesting low wages and poor working conditions.