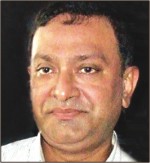 A Sylhet court yesterday sentenced detained former BNP lawmaker M Naser Rahman to nine years in prison in an extortion case.
Three others--Roads and Highways executive engineers Shafiqul Islam and Abdul Khaleque, and district BNP leader Moulavi Wali Siddique--each were given five years' imprisonment. They have been on the run since filing of the case.
Naser, son of former finance minister Saifur Rahman, copped jail terms of seven years and two years on separate counts. He will have to serve out both the sentences concurrently.
The Third Additional District and Sessions Judge's Court, Sylhet, however, acquitted Moulvibazar municipality Chairman and district BNP General Secretary Fayezul Karim and Roads and Highways Sub-Divisional Engineer Monwar Sadique on the charges brought against them.
It did not pass any order on Sylhet city BNP chief Ariful Haque Chowdhury, another accused in the case, since a High Court (HC) bench on July 25 stayed the proceedings against him for six months.
The joint forces arrested Naser on February 4 in the beginning of the army-backed caretaker government's drive against corruption that also saw many other political and business bigwigs detained.
Contractor Nuruzzaman filed the case on February 17 this year.
He alleged that Naser and six others had demanded from him Tk 2 crore on October 10, 2003. Of the accused, Shafiqul, Abdul Khaleque, and Wali Siddique have been on the run since filing of the case.
District and Sessions Judge of Sylhet on 5 August shifted the case to the court of Third Additional District and Sessions Judge Binoy Kumar Majumder for trial.
Both Naser and Ariful Haque were among the first 50 graft suspects announced by the Anti-Corruption Commission (ACC).
Nuruzzaman hit the headlines first four years ago when he brought extortion charges against Naser, then a ruling party lawmaker from Moulvibazar Sadar.
He accused the then finance minister's son and his men of attempts to coerce him into giving them huge sums after he won some contracts under the Roads and Highways department. Soon he was implicated in a number of cases filed allegedly on Naser's dictates.
Our court correspondent in Dhaka adds: A Dhaka court will decide today whether to accept the charge sheet of a Tk 2.99 crore extortion case against Awami League (AL) chief Sheikh Hasina, her sister Sheikh Rehana and their cousin Sheikh Fazlul Karim Selim.
Another Dhaka court yesterday issued an arrest warrant against Dhaka City Corporation Ward Commissioner Monwar Hossain Dipjol after the National Board of Revenue (NBR) filed a tax evasion case.
Besides, two other courts rejected bails of detained advocate Sigma Huda in two criminal cases filed with Shahbagh and Tejgaon Police Stations.
After scrutinising the case documents, Metropolitan Magistrate KM Ruhul Amin will pass order on the issue.
Gulshan Police Station Officer-in-Charge Obaidul Haq, also the investigation officer of the case, submitted the charge sheet against Hasina, Rehana and Selim to the Chief Metropolitan Magistrate's Court on July 24.
Twenty-four people were shown as prosecution witnesses in the charge sheet.
Azam J Chowdhury, managing director of Eastcoast Trading Pvt Ltd, filed the case with the Gulshan Police Station against Hasina and Sheikh Selim on June 13 for extorting Tk 2.99 crore from him.
Rehana's name was included in the charge sheet as her involvement with the extortion was found during investigation.
Joint forces arrested the AL chief in connection with the case on July 16 and produced her before a magistrate's court that sent her to a sub-jail.
Two more extortion cases were filed with Tejgaon Police Station against Hasina on April 9 and June 13.
Besides, the Anti-Corruption Commission (ACC) on Sunday filed a case with the same police station against Hasina and six others for taking bribe.
DIPJOL CASE
Metropolitan Sessions Judge Mohammad Azizul Haq passed an arrest warrant against Dipjol after Mohammad Muhtasibur Rahman, deputy tax commissioner of the NBR, filed a case.
Muhtasibur said Dipjol, proprietor of Dipjol Food Industries Limited, had evaded income tax upon his earnings of Tk 121,402,999 from fiscal year 1989 to 2007.
Earlier, Dipjol was awarded 27 years' rigorous imprisonment for possessing illegal firearms and ammunition at his Mirpur residence.
SALAHUDDIN CASE
The same court yesterday issued custody warrant against detained former BNP lawmaker Salahuddin Ahmed after Additional Assistant Tax Commissioner Abdul Halim filed a case for evading income tax of Tk 3,046,655 from fiscal year 2003 to 2007.
SIGMA HUDA CASE
Two metropolitan magistrates yesterday issued rejection orders after the counsel of Sigma Huda, wife of detained former communications minister barrister Nazmul Huda, submitted petitions seeking bail for her in two criminal cases.
The magistrates in their orders mentioned that her bail was rejected as the charges brought against her were primarily proved and the investigation was underway.