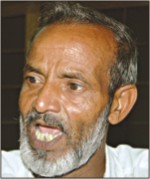 An assault on a freedom fighter by some operatives of Jamaat-e-Isalmi and its students' wing Shibir on Friday in the capital sparked widespread condemnations and protests across the country yesterday.
The operatives of the political organisations, well documented as major anti-liberation forces in the country, dragged and kicked veteran freedom fighter, Sheikh Mohammad Ali Aman, as he demanded immediate trial and execution of war criminals while speaking to the news crew of a private TV channel outside the venue of a representatives' meeting of a Jamaat backed organisation ironically named 'Jatiya Muktijoddha Parishad' or the National Forum of Freedom Fighters.
Mohammad Ali attended the programme at Diploma Engineers Institution thinking the organisation was a platform for freedom fighters, but ultimately had a violent awakening to its real character.
"Don't ask me to describe the assault on me. I can't narrate the ordeal, I can't bring shame on the liberation war," the valiant freedom fighter burst into tears yesterday as he uttered these words.
Asked whether he will file a case, Mohammad Ali firmly said he will not file a case as an individual, adding, "The government must take legal actions against the perpetrators as the assault on me was an assault on all freedom fighters and desecration of the liberation war." he told The Daily Star in the office of private satellite television ETV.
Hailing from Tangail, the freedom fighter fought in the liberation war under sector 11 as a member of the First Bengal Regiment.
He hoped that the caretaker government will arrest the perpetrators and ensure exemplary punishments for them.
Mohammad Ali said he was leaving the programme after speakers there had started delivering speeches against the sector commanders of the liberation war. As he came downstairs, journalists asked him to say a few words about the programme, so he demanded immediate execution of collaborators including the Razakars and Al Badars. As he said that, Jamaat-Shibir activists dragged him away from there into a room kicking him on the way.
The Jamaat-Shibir operatives also confined an ETV reporter inside a room there and tried to snatch the recorded film from the camera crew who managed to escape. The reporter however was released after an hour after his colleagues rushed to the scene.
CONDEMNTIONS
Different pro-liberation organisations and liberation war heroes yesterday strongly condemned the assault on the veteran freedom fighter by Jamaat-Shibir activists.
They also condemned the fact that 'anti-liberation' forces like Jamaat nowadays even get the gall to form a freedom fighters forum under its umbrella, even after being the 'leader of collaborators' during the liberation war.
Harun-Ar-Rashid, chief coordinator of Sector Commanders' Forum, said the government's silence regarding the matter so far has been 'despicable'. He demanded immediate arrest and trial of the perpetrators.
Dhaka City Unit Command of Bangladesh Muktijoddha Sangsad, the Communist Party of Bangladesh, Udichi Shilpi Goshthi, Bangladesh Chhatra Union, Bangladesh Muktijoddha Union, and Bangladesh Jubo Union also strongly condemned the assault and demanded trial of the perpetrators.
The organisations said 'the so-called freedom fighters, who are hobnobbing with Jamaat, are the enemies of the country'. They urged all genuine freedom fighters to be united to resist the 'war criminals'.
The organisations also demanded a ban on Jamaat and Shibir as political organisations and a ban on religious obscurantist politics in general, while demanding trials of war criminals.
Ekattorer Ghatok Dalal Nirmul Committee also condemned the incident.
Our DU correspondent added, Bangladesh Chhatra Union (BCU), a left leaning student organisation, yesterday evening burnt three effigies of Razakars, Al Badars and Al Shams naming the trio 'Jammat-Shibir axis' in front of Raju Memorial on Dhaka University (DU) campus protesting at Friday's assault on the freedom fighter.
Later, Progotishil Chhatra Jote (PCJ), an alliance of left leaning student organisations in DU, brought out a protest march and held a rally on the same spot protesting Friday's 'abomination'.
Our Pabna correspondent reported that Pabna District Unit Command of Bangladesh Muktijoddha Sangsad, held a protest meeting on its office premises yesterday. Leaders of the freedom fighters assembly said the people of the country are uniting around the demand for punishments for war criminals.
Demanding exemplary punishment of the perpetrators, leaders of Sector Commanders' Forum Maj Gen (retd) KM Shafiullah and Col (retd) Abu Osman Chowdhury during a discussion meeting yesterday said Jamaat who opposed the liberation war now has the gall to form a freedom fighters' organisation.
"We will have to save the nation form their hands," said the war heroes.
Harun-Ar-Rashid said freedom fighters are the best sons of the soil. It is the responsibility of the government to protect them. "The government will be responsible if the freedom fighters took the laws in their own hands," he cautioned.
Islami Research Council organised the discussion titled "War criminals in the eye of Islam: trial and punishment" at the Jatiya Press Club.
Meanwhile, Jamaat-backed Jatiya Muktijoddha Parishad said their volunteers prevented a number of people who tried to forcefully enter the conference hall Friday.
In a statement it also said ETV recorded it on purpose and interviewed those people.
"ETV along with some yellow journalists staged the matter to foil the conference," reads the press release.