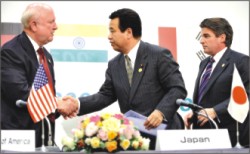 Eleven nations that guzzle nearly two-thirds of the world's energy called Sunday for an urgent hike in global oil production as host Japan warned the world could plunge into recession.
Energy ministers from the Group of Eight (G8) industrial powers met in the northern Japanese city of Aomori with officials from China, India and South Korea in the wake of a record spike in oil prices.
The 11 nations represented here voiced "serious concerns" over the level of oil prices and said there was an "urgent need for increased and timely investment in the energy sector."
In a joint statement, they called for boosts to their own production and asked major oil producers "to increase investment to keep markets well supplied in response to rising world demand."
The countries also agreed to design a new framework -- called the International Partnership for Energy Efficiency Cooperation (IPEEC) -- under which they can share ideas about how to save energy.
The meeting came after oil prices on Friday posted their highest ever one-day gain of nearly 11 dollars, hitting a new record of 138.54 dollars a barrel in New York trade.
"If we leave this situation as it is, it could lead to a recession of the world economy," said Japan's energy minister Akira Amari, the host of the meeting.
"Ensuring energy security, including stability of the oil market, has become one of the top priorities for every country," he said.
Oil prices have soared five-fold since 2003 due to a variety of factors including turbulence in the Middle East and rising demand in emerging economies such as China and India.
In a nod that they were not pinning all the blame on oil producers, the 11 nations said that the oil market faced structural problems including the growth of global demand, particularly in transportation.
The European Union's energy commissioner Andris Piebalgs warned that high oil prices were a fact to be reckoned with and that major economies needed to come up with alternative energy.
"The era of cheap energy seems to be over and no economy should gamble on a potential return to low prices," Piebalgs said.
"It is far better to make the right investments in clean, efficient energy technology and energy resources now and to reap the benefit later."
The G8 groups Britain, Canada, France, Germany, Italy, Japan, Russia and the United States.
Energy Minister Sergei Shmatko of Russia, the only major energy exporter at the talks, told reporters: "We want to maintain our position as a stable energy supplier to other countries."
The talks in Aomori, a hub of Japan's nuclear energy industry 600 kilometres (370 miles) north of Tokyo, were one of a series of meetings leading up to the G8 summit on July 7-9, when climate change is expected to be a top issue.
The joint statement called for all G8 countries to introduce "carbon capture" -- containing emissions blamed for global warming at power plants rather than releasing them -- by 2010.
Amari said that the 11 nations meeting in Aomori together consume 65 percent of world energy while also releasing 65 percent of the carbon dioxide emissions.
"Climate change and energy issues are two sides of the same coin," Amari said. "It is indispensable to solve these problems together.”