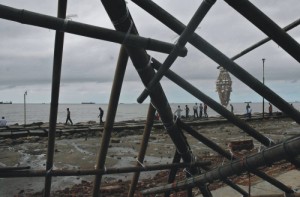 Bangladesh is recognised around the world as a disaster-prone country. This isn't because God is angry with us (as some would maintain!) but rather our unique location at the crossing point of two different environments (the Himalayas in the North and the Bay of Bengal in the South). The topography is low and flat, with 10% of the land barely 1metre above the mean sea level (MSL). The Intergovernmental Panel on Climate Change (IPCC) in 2001 identified countries like ours as the most vulnerable to climate change.
The threats to Bangladesh from climate change can be broken down into the following effects:
Increase in cyclone intensity
A rise in sea surface temperature (SST) is associated with increase in wind speed, which
would lead to more depressions turning into cyclonic storms that hit Bangladesh.
Higher storm surges
Winds and atmospheric pressure changes associated with cyclones generate storm surges. Any increase in SST will lead to greater convective instability, leading to an increase in the wind speed and higher storm surges.
Coastal erosion
Climate change and the resulting sea level rise (SLR) have a long-term impact on coastal erosion. This is particularly true for the central coast of Bangladesh that is the most active amid continuous accretion and erosion.
Back water effect (BWE)
BWE refers to the reverse flow of the water from the sea to the river due to a rise in the level of water at the mouth of the river, which is an effect of SLR. BWE occurs mainly at estuaries such as the Meghna estuary. This exacerbates the flood and the resulting inundation during the flood season.
The policy measures available to Bangladesh to meet this threat are unpalatable at best.
What can we do? Well, simply put, our choices are to retreat, adapt or mitigate. Given our limited land area, retreat doesn't seem to be a practical solution. As such, adaptation and mitigation are our best bets.
The coastal areas of Bangladesh are the most susceptible to climate change, hence it is vital to identify the vulnerable social groups in these exposed areas. We first require a working definition of social vulnerability. In climate change literature it is often termed as "the exposure of groups or individuals to stress as a result of the impacts of climate change and related climate extremes." Social vulnerability can be further broken up according to differing determinants into individual and collective vulnerability.
Individual vulnerability is determined by access to resources, diversity of income sources and relative status of individuals in society. Coastal communities in Bangladesh and most countries are dependent on sources of income that are "climate dependent." Some examples of such sources are agriculture, fisheries and aquaculture. Other major sources of income include remittance and wage income.
As such, coastal households whose income is primarily made up of "climate dependent" income generating activities tend to be more susceptible to the negative income shocks arising from climate shocks.
Collective vulnerability is determined by institutional and market structures (e.g. social security systems and insurance, infrastructure and income). The effects of a natural shock are often mitigated by resorting to common property resources (CPRs) such as common grazing grounds.
Such access is often determined by the relative access individual households have to CPRs. This is, in turn, determined by the inequality that exists in that particular group. Hence, income inequality provides a close proxy for collective vulnerability. Both definitions and resulting proxy measure of social vulnerability can be used to identify the most socially vulnerable groups in the target area. The actual policy implications would be to provide support to the most exposed and vulnerable groups on a priority basis in the beginning, followed by other groups.
Given that adaptation to climate change seems to be the way to go, coastal areas should be targeted for diversification in terms of economic activities. This would reduce the dependence on "climate dependent" economic activities and lessen the vulnerability of the dependent groups.
Better-shared management of CPRs should also be on the agenda, with an emphasis on more equitable access to all members of the community. The issue of social safety nets has been raised many times. In this light, such mechanisms must take into account the need for external assistance, given that a natural disaster would affect the entire community in question.
Dr. Navil Mansur Chowdhury is a lecturer in the Dept. of Economics and Social Sciences, BRAC University.