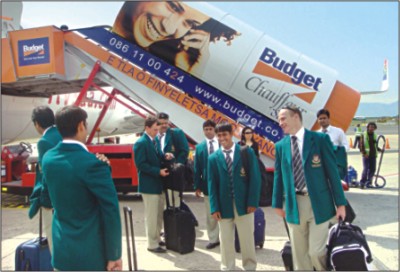 Bangladesh captain Mohammad Ashraful (C) walks off with the rest of his teammates from the tarmac of Cape Town's airport after arriving from Johannesburg on Friday for their ICC Twenty20 World Championships match against hosts South Africa today. PHOTO: TIGERCRICKET.COM

Fresh from a splendid six-wicket win over West Indies which confirmed them a spot in the second round of the ICC World Twenty20 Championships, Bangladesh face hosts South Africa with the glorious memory on their mind.
Bubbling with confidence, Tigers captain Mohammad Ashraful has nothing but win even though both teams have guaranteed their places in the Super Eights from Group A.
"We are capable of beating any team and in Twenty20, there are no favourites. We will go into the next match against South Africa with victory on mind. We defeated them in the World Cup (in West Indies) and we believe we can do that again," said Ashraful while talking to TigerCricket.com, who led from the front to script the first-ever victory against the Caribbean.
Bangladesh skipper's fastest half-century in their group opener enabled the Tigers to shoot the West Indies out of the tournament and it is nothing exceptional that the prolific right-hander was also the hero with a fabulous knock of 87 in Bangladesh's 67-run victory against South Africa in the one-day World Cup earlier this year.
The match will be held at Newlands under lights starting at 10pm Bangladesh Time (6pm local time) with ESPN beaming live coverage.
Bangladesh arrived in Cape Town yesterday morning from Johannesburg following a two-hour flight and is staying at the Southern Sun Newlands Hotel which is just about a five-minute drive to Newlands and sits at the foot of the famous Table Mountain, visible from every corner of this lush city.
The squad have had training yesterday at the Belville Cricket Club in the afternoon and expected to announce the team after that. The same eleven will play in the match.
Meanwhile, rival captain Graeme Smith and Herschelle Gibbs are making progress following the injuries they picked up in their opening day victory against West Indies, but Gibbs may not be risked.
The South African team arrived in Cape Town on Wednesday and are preparing for back-to-back matches at Newlands over the weekend. Smith, who picked up a soft tissue injury to his right hand after taking a blow from Daren Powell, didn't bat during the team's training session at Bellville.
Coach Mickey Arthur hopes he will have a hit on Friday and admitted losing both Smith and Gibbs would be a significant blow.
"They are two of our most experienced players and they are in good form at the moment so it is a little bit of a concern but we are confident of having them ready for Sunday," he said, adding that AB de Villiers is likely to remain at No. 3 with one of Gulam Bodi or JP Duminy replacing Gibbs as opener against Bangladesh.
After watching their neighbours Zimbabwe overcome Australia on Wednesday, Arthur is well aware that the gap between sides is narrowed in Twenty20.
"You can't take anyone lightly. It does become a little bit of a lottery and class-wise the teams coming a little closer together."