Strategic players in the Middle East 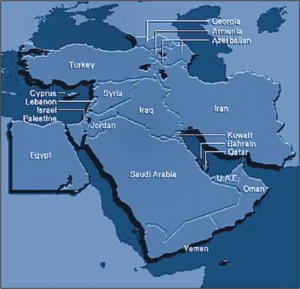 THE hallmark of the Bush administration is not to engage in diplomacy with America's adversaries. During his visit to Israel in the second week of May, President Bush criticised Democratic Presidential contender Senator Barack Obama's readiness to pursue diplomacy with the so-called 'perceived' enemies of America. The President called the strategy as 'appeasement repeatedly discredited by history'.
What President Bush meant was that Britain and France did not resist the expansionary moves of Hitler's Germany. Historians believe that Britain and France at the time perceived more evil in Communism of Soviet Union than they did for Nazism.
The Bush administration looks at most problems that have a simple solution, often a military solution. US Vice President Cheney told long time ago that he had no faith that diplomacy would work with Iran. He said that he would not be surprised if Israel decided to take out Iran's nuclear facilities. It is reported that lately Cheney has been advising the President to go for a military solution before he leaves office, if Iran does not halt its uranium enrichment nuclear program.
The US, instead of diplomacy, wants to increase the military power of some of its allies in the Middle East. It reportedly would provide US$30 billion aid to Israel over 10 years, representing a 25% increase from present levels. Already Israel has replenished the weapons that were lost during the Lebanese war.
The US wants to strengthen Egypt's ability to "address shared strategic goals" by giving US$13 billion worth of weapons as the Secretary of State reportedly stated. What is the shared goal? Saudi Arabia and other five Arab countries are expected to get US$20 billion worth of advanced weapons as a counterweight to Iran and Syria.
The goal is to contain influence of Iran and Syria in the Middle East and to lobby for Israel among Arab States to soften their attitude towards Israel.
Human Rights Watch said the arm-sales would undermine US goals in the Middle East. This will reduce pressure on Egypt and the Arab states to reform their political system through participation of ordinary people in governance through elected representatives.
On 28th July, 2007, the Democrat congressman Anthony Weiner and Robert Wexler said that they would oppose the deal and move a resolution of disapproval to block the deals to Saudi Arabia. Mr. Weiner reportedly said: "Saudi Arabia should not get an ounce of military support from the US until they unequivocally denounce terrorism and take tangible steps to prevent it." The congressman pointed out that 15 out of 19 hijackers who carried 9/11 attacks were Saudi nationals.
The Middle East is in a mess. The countries in the region privately blame the flawed policies of the Bush administration. By isolating itself, it is believed the US has dwindled its credibility.
It is interesting to note that Dr. Aaron David Miller, who worked under both Republican and Democratic administrations, in his book "The Much Too Promised Land", (March 2008) writes that the Bush team in eight years has managed to put America in the unique position in the Middle East where "it is not liked, not feared, and not respected'.
It is a pity that the US has cut off itself from the region on the false assumption that it can somehow maximise pressure on its adversaries by withholding contact, choose to show off its military power and some say pushed its local allies in civil wars.
Over the past five years, favourable ratings for the US have decreased in 26 of the 33 countries. Pew report said: "Global distrust of American leadership is reflected in increasing disapproval of the cornerstone of US foreign policy."
Many think that Iraq would go down in history as the greatest disaster in American foreign policy. George Soros further has stated in his book titled "The Age of Fallibility" (2006) that the root -cause of trouble of the Bush administration "is a false metaphor, the war on terror. It has done terrible damage to our standing in the world and endangered our open society at home."
When the Bush administration has withdrawn itself from engaging its adversaries, it has also missed the opportunity to broker peace in the region through its diplomacy. As a result the countries in the region have stepped up and took initiative to resolve some of the intractable issues of the region, namely , Israel-Hamas conflict, Israel- Syria confrontation and Lebanon's crisis between Hezbollah and government.
Egypt, Turkey and Qatar, close allies of the US filled the vacuum. The Gaza-Israeli deal is being brokered by Egypt, Turkey is using its good offices between Israel and Syria and Qatar mediated the Lebanon's crisis.
It is not known whether the initiatives by Egypt, Turkey and Qatar would end in positive result or not.
It is acknowledged that Palestinian Chairman would have been much stronger in a deal with Israel if Hamas and Fatah groups of Palestinians forge unity, Lebanon's Siniora government would have been effective if it would have agreed earlier the power-sharing formula with Hezbollah and if Israel and Syria could settle on the illegal occupation of Golan Heights of Israel, peace would dawn in the Middle East.
Plenty of examples in history shows clearly dipomatic engagement with adversary brings fruitful results. One of the examples is the Bush administration's direct engagement with North Korea has helped shut down its nuclear reactor at Yongbyon and disclosure of its nuclear programmes.

The author is former Bangladesh Ambassador to the UN, Geneva.