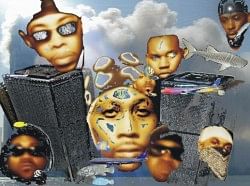 Journalist Harry Allen once called Islam "hip-hop's unofficial religion." This theme is echoed by Adisa Banjoko, unofficial ambassador of Muslim hip-hop, who says: "Muslim influence was at the ground floor of hip hop. Hip hop came from the streets, from the toughest neighborhoods, and that's always where the Muslims were."
Hip-hop's Muslim connection came initially via the 5 Percenter sect, and later expanded to embrace Nation of Islam (NOI), Sufi, and Sunni Islam. Since the 1980s, there have also been shifts where 5 Percenters have moved to NOI or Sunni beliefs. The same artists' back catalog may reflect both his 5 Percenter beliefs and his later NOI faith. Islamic iconography, philosophy, and phrases are in fact so widespread in hip-hop, they show up regularly even in the works of non-Muslim rappers.
In spite of this pioneering and continuing role, Islam as a cultural force in hip-hop is severely under-documented. Elsewhere in mainstream media, the Muslim connection is never spoken aloud, even in the middle of thorough analysis and journalism. Ted Swedenburg calls this "almost willful avoidance." In this, there are parallels to the larger invisibility of black Muslims, who have been shut out of many conversations around the role of Islam in America.
This deliberate invisibility mirrors America's continuing unease with Islam. Black Muslims and hip-hop are frozen out of the larger debate over Islam because they would problematise the entire conversation. If we acknowledge that the largest segment of American Muslims are black Americans, it makes it more difficult to stereotype Muslims as "immigrants" or "outsiders."
Furthermore, if we look at Muslim anger and see within it a portion that is African-American, we are forced to confront an indictment of American society. This is a viewpoint that the music press has assiduously avoided. Finally, the idea of Islam as a obscurantist force rubs against its positive influence within hip-hop. Hip-hop scholars have not been able to absorb or observe the Muslim role in creating unique rhyme flows and politically conscious hip-hop. Safer perhaps to avoid the topic.
Born Muslim, Born Black?
A dominant discourse links American Islam to Arabs and South Asians, considered new arrivals to America's shore. But statistics tell a contradictory story. According to research presented by the American Muslim Council (AMC), in 1992, between 5 to 8 million Americans followed some variation of the Islamic faith.
AMC calculated the largest bloc of Muslims to be African-Americans at 42 percent. If African immigrants are included, the number goes up to 46 percent. South Asians are the next highest at 24 percent. Only 12 percent of American Muslims are of Arab descent (majority of Arab Americans are Christian). Looking at subsections within the black population, we find the proportions even higher: 30 percent of African Americans in the prison system are Muslim, many of whom convert after incarceration -- following the trajectory of Malcolm X and Imam Jamil Al-Amin (formerly H. Rap Brown).
There are many reasons why Islam has been popular among African-Americans from the beginning. Scholars point to the roots of Islam within the original slave populations. Silviane Diouf calculated that "up to 40 percent" of the Atlantic slave trade was Muslim.
[For the full version of this article, please read this month's Forum, available with The Daily Star on Monday, June 2.]
Originally published in Sound Unbound: Sampling Digital Music and Culture (MIT PRESS, 2008), edited by Paul D. Miller. The essay was short-listed for the Vilem Flusser Theory award, Berlin.