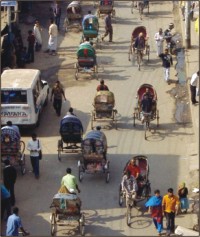 Number of unlicensed rickshaw pullers continues to rise in the city due to lack of monitoring.Photo: STAR

Dhaka City Corporation (DCC) has provided licence to around 79,000 rickshaw-pullers and about 10,000 rickshaw van drivers, but the number of unlicensed rickshaw-pullers continues to rise in the city due to lack of monitoring.
Sources said the actual number of rickshaw pullers in the city is about four times the number of licences issued. They are pulling rickshaws freely, making DCC's licence programme meaningless, said licensed rickshaw-puller and owners.
Most of the licensed rickshaw-pullers expressed frustrations over the pulling licence programme, saying that the DCC or law enforcers never ask them to show the licence, which they got from DCC paying a fee of Tk 30.
Hamidul Islam, a rickshaw-puller who obtained a licence, said that for collecting the licence last year, he stayed at least one and a half day in a long queue at a zonal office of the DCC with hundreds of other pullers.
For getting a pulling licence, he paid Tk 30 as licence fee and spent Tk 50 for photographs, and at least Tk 200 for meals during the stay in the queue. “I spent so much money to obtain the licence but it has become a useless paper,” he said.
The rickshaw-pullers and owners alleged that DCC started the licence programme only to earn money, without specifying the policy for authorised and unauthorised rickshaws.
DCC sources said they do not conduct any drive against the unauthorised pullers considering the fact that such a drive could eliminate three-fourths of the total rickshaws from the city, creating a huge transport gap.
The demand for rickshaws in the city is increasing with the rapid growth of population.
Rickshaw pullers and garage owners said the DCC officials were well aware of the fate of the licence programme but they implemented the programme haphazardly.
They said many people, driven by poverty, come to the city from rural areas and become rickshaw-pullers without any training. They were not given the opportunity of training even while providing them with the pulling licence.
The DCC has created scope of counterfeiting the licences by a section of unscrupulous forgers who made money by selling them to unlicensed pullers as the city corporation's licence does not have any protective features.
DCC officials said they did not have any additional fund for arranging costly and highly secured licences or providing training to the rickshaw-pullers.
About forgery of licences, a top official of DCC admitted that the licences do not have any security feature. “These are printed papers with DCC seal only.”
Fazlur Rahman, president of Bangladesh Rickshaw Van Chalak Oikyo Parishad alleged that brokers and some officials of DCC made money from the 'licence business'. The brokers sold a huge number of fake licences to the pullers last year.
About the authenticity of the contents of the pulling licences, he said that every licence describes the blood group of its bearer, but the blood group was mentioned without testing the blood of the rickshaw-pullers.
“DCC did not checked the level of traffic sense of the licence holders, even did not provide a little traffic education to them which is essential” he added.