Brushes with faith, sin and the weird 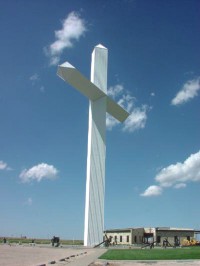 I'm in my car, driving. The cell phone pressed against my ear, I'm listening to a funny story about Muslim speed dating in Houston. The next minute, my eyes take over. Just ahead, to my right, is the tallest cross I've ever seen, its metal body gleaming in the morning sun. A few dozen people are gathered at the base. Some are praying on their knees.
I return my attention to the highway, Interstate 40 headed east. On the third day of my drive from Los Angeles, I had just entered Texas. The desert landscapes of New Mexico had given way to ranching land, dotted here and there with trees. The exit sign says Groom. Thinking anything's possible, I wonder if the next town will be Bride.
After my trip is over and I have time to look things up, I will discover that the Groom cross is 19 stories tall, the second highest in the western hemisphere. The tallest--by eight feet--can be found in Effingham, Illinois.