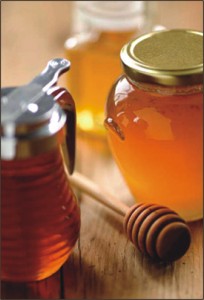 Which is the mother of all medicines? Yes, 'honey'. It takes 300 bees flying 15,000 air miles to make about 1/2 kg of honey, which will contain the pollen of two million flowers. It is available in most of the countries and not that costly. Finally it is gaining scientific recognition and international attention as a wonderful food and medicine. Recently, the Australian Therapeutic Goods Administration has also approved honey as a medicine. However, it has been used as a medicinally in India, Egypt and the Middle East for thousands of years.
Honey is truly a head-to-toe cure remedy. Modern medicine is slowly learning this fact. It is an effective treatment for depressed immune system. It can increase hemoglobin count and treat anemia caused by nutritional factors.
Honey is a unique source of energy that provides 64 calories per tablespoon. Moving down the esophagus and through the digestive tract, honey can help distressed stomachs. It has been proven to regulate digestive tract function. It reduces the weight and good for obese people. It contains at least 31 nutrients, 13 minerals, the component part of nine vitamins, 20 of the 22 known amino acids and four key enzymes. Constant use of honey strengthens the white blood corpuscles to fight bacteria and viral diseases.
It has been published that pure honey taken with food daily relieves complains of high cholesterol. Honey increases calcium absorption. It stimulates the formation of cells and tissue, acts as an anti-rheumatic and relieves inflammation. It is helpful in treating Arthritis. It also contains a variety of antioxidants, which may reduce the risk of cardiovascular disease and cancer.
In a fascinating modern development, scientists and doctors are beginning to rediscover the effectiveness of honey applied topically to wound and burn treatment. Raw honey contains natural antibiotics, which can kill bacteria.
It has been compared with silver sulfadiazine, the standard treatment for superficial burns. As an antiseptic, honey is also a drawing agent for poisons from bites or stings or infected wounds.
Honey is also exceptionally effective for colds and all kinds of respiratory illnesses. One study of more than fifteen hundred patients found that it improved chronic bronchitis, allergic rhinitis and sinusitis. Many have found two teaspoons of raw honey, last thing at night can help with 'sleeplessness'.
But certain precautions should be taken. Children below one year should never be given honey due to the risk of infant botulism. Also, if you have any known allergies to specific plants, then make sure that the honey you are using is not made from that plant. People with allergies to bee stings should be careful when using other bee-related products.
Honey and black seed is a good combination. Some studies revealed that the combination of honey and cinnamon or garlic (organic) and apple cider vinegar (unpasteurised) is a wonder drug. Today, some people may turn to honey when nothing else works.
But there are good reasons for using honey as a curative of first choice. Let honey be a beneficial addition to any cup of tea or drinking water or milk and don't hesitate to make such a sweet solution to your life.
(To be continued)