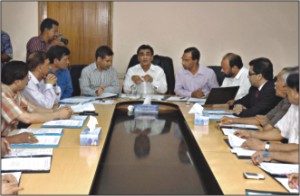 The newly elected executive committee of Bangladesh Football Federation (BFF) kept its promise to roll the game into the ground as soon as possible by announcing a July start of the 2008 season.
The Kazi Salahuddin-led committee also showed respect to a tri-party agreement among the previous BFF body, clubs and players as it declared after yesterday's meeting that the transfer for the B. League -- the professional league -- will begin on schedule in May.
After the May 15-June 20 transfers, the Federation Cup will be held in July with the B. League clubs and another tournament is billed for August before the B. League rolls in September.
"This will make sure the footballers would be prepared fully for the professional league. Also, we wanted to hold our main competition, the B. League, in winter as all the countries do that," said BFF president Salahuddin after the EC meeting at the BFF Bhaban.
When asked whether the tourney in August would be an international meet, Salahuddin said the BFF did not want to commit right now.
"It would be decided soon. Our main target is to make the B. League a huge success. We want people in other countries to recognise the B. League as the competition of Bangladesh," he added.
The BFF also made a number of decisions and the most convincing one was naming vice-president Badal Roy as the chairman of the National Team Management Committee.
"Badal will form the committee and he will have absolute freedom to take any decision regarding the national team," said the BFF chief.
Badal, who played a vital role by motivating the players to end a row between them and the management, leading Bangladesh to win the SAF games football gold in 1999 in Nepal, said that he has already talked with national coach Abu Yusuf in Kyrgyzstan to know whether the team would need any additional player for next month's SAFF Championship in Sri Lanka and Maldives.
"The coach will let us know within a couple of days about his requirement and we will tell the players at home to prepare. We will also take the team to camp immediately after their return from Kyrgyzstan," informed Badal.
Former national striker and BFF member Sheikh Mohammed Aslam has been named manager for the SAFF Championship while vice-president Kazi Nabil the team leader.
The BFF also named former general secretary Anwarul Haque Helal as chairman of the finance committee, senior vice-president Abdus Salam Murshedi as chairman of the B. League committee and Kazi Nabil as the vice-chairman.
Salahuddin himself will head the 10-member emergency committee that will take all decisions in case the whole EC is unavailable. The other members are Salam, Helal, Badal, Nabil, Harunur Rashid, Sirajul Islam Bachchu, Manzoor Hossain Malu, Shawkat Ali Khan Jahangir and Golam Rabbani Helal.
"These committees will help the machine that is BFF start operating immediately," mentioned Salahuddin admitting that his committee started with a he financial deficit. "Zero would have been a nice amount but we are starting on deficit."
It was learned that the BFF is in debt of about Tk 40 lakh.
Still, the governing body of football is contemplating introducing school football in Dhaka and Chittagong in the initial stage and a committee will be given the duty to inspect grounds and facilities in the two major cities.
The BFF, which will finalise and publish the calendar for the next two years within weeks, has also started talks with the districts and DFAs in a bid to start district leagues will also seek assistance of the government regarding this.