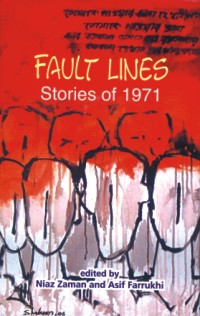 Way back I had read Pakistani writer Umme Umara's short story about 1971, 'The Sin of Innocence,' in a collection of stories from Pakistan. It was the first time I read Pakistani writers on our liberation war. After that, however, I could not access any more of their writing on this subject. Until now, when Professor Niaz Zaman and Asif Farrukhi from Bangladesh and Pakistan have jointly edited Fault Lines: Stories of 1971 (Dhaka: UPL; 2008). Umme Umara's story, coincidentally, is the first one here. The volume is noteworthy for its attempt to portray the diverse, complicated experience of 1971 from both sides, with stories translated from Bangla, Urdu, Punjabi and Sindhi, as well as some originally written in English. Translations rather than stories written originally in English form the main bulk of the book.
Most of the stories by Bangladeshi writers narrate heroic tales of freedom fighters during the nine months. Fiction by Akhteruzzaman Elias, Humayun Ahmed, Syed Manzoorul Islam, Kazi Fazlur Rahman and Manju Sharker fall within this category. A vital theme covered by Bangladeshis is the contribution of biranganas, or war heroines. 'Double War' by Selina Hossain, Parag Chowdhury's 'Why Does Durgati Weep' and 'What Price Honour' by Rizia Rahman are stories that not only depict feminine bravery but also underline the fate of women in a liberated country where promises made were not kept. Shaheen Akhter's 'She Knew the Use of Powdered Pepper' is an intriguing story of a madwoman's repeated escapes from the clutches of the enemy, underscoring the problem of not recognizing a real birangana. The subject of ordinary people confronting the brutality of war is also another preoccupation of Bangladeshi authors. Among these are 'A Day in Bhushan's Life' by Hasan Azizul Haq, 'The Daughter' by Saleha Chowdhury, Shaukat Osman's 'The Bill,' and 'Returning Home: 1972' by Purabi Basu. 'The Body' by Afsan Choudhury illustrates the Pakistan army's savagery as the decapitated, circumsized body of a Muslim man saves a Hindu family from certain death.
Contrary to some impressions, Pakistani writers were not totally silent about the '71 war. A number of them use a surrealistic style in depicting the war, where the manner of story telling is more prominent than content. This new trend influenced Pakistani writing after '71, observes Asif Farrukhi in his half of the editorial note. It is noticeable in 'Versions of Truth' by Masood Ashar where we read, "Truth has so many faces. One man's truth can negate another man's truth. And when so many versions of truth clash, everything becomes an absurdity, loses all meaning, all sense." A remarkable story by Golam Mohammad, 'The Travelers,' is a despairing tale from the viewpoint of some Bangladeshi villagers. A story by the Indian writer Mohan Kalpana shows the dangers of how excessive jingoism. Pakistani writer Masud Mufti's 'Sleep' demonstrates how war can blind us to the truth when the Pakistani army mistakenly kills a sleeping West Pakistani in Dhaka. Pakistani authors also focus on the problem of Biharis who could not settle permanently anywhere after the '47 partition and the '71 war. Yet others emphasize how war in general divided people's life in South Asia for generations. Umme Umara's tale, written in this light of partition and dislocation, is also a rare example of Urdu writing from the former East Pakistan. Interestingly, Bangladeshi writers Khademul Islam's 'An Ilish Story' and Neeman Sobhan's 'The Year of the Iron Dog', written originally in English, also depict '71 as an extension and repercussion of the '47 partition.
Asif Farrukhi's 'Expelled,' recalls uneasily his 'fish-eating' Bengali buddy Abdul Batin, who was bullied as a "traitor" in school and never returned to it even after the missionary teachers made his classmates publicly apologize to him. Niaz Zaman's 'A Lucky Escape' touches on the topic of forgiveness and reconciliation.
The bright crimson dust-jacket makes for an attractive package in spite of the occasional errors in grammar and printing. The selection of stories from Bangladesh, I felt, could have been more relevant. Similarly, some stories from Pakistan such as, 'Fork Lift No. 352' and 'A Grave Turned Inside-Out' are not directly linked with '71 but war in general.
The socio-political background in the foreword provides ample information about '71 but the editors' personal accounts and political perspectives clearly do not represent their nations. Although Professor Niaz Zaman welcomed the liberation war of Bangladesh wholeheartedly, she repeatedly questions the Father of the Nation Sheikh Mujibur Rahman's contribution to the independence movement. On the other hand Asif Farrukhi's narration of "double loss," of a fractured land and loss of a language, may not reflect the majority sentiment of his country. This personal prelude may be dangerously confusing and misleading for the younger generation. However, this collection is a brilliant attempt and an essential read for all those, from both countries, who want to get some insight into the "other side" of the story of '71. Fault Lines clearly sprang from an idealistic conviction: that the tales of '71 should be told, heard and shared by all, no matter how differently we view the war.
Masrufa Ayesha Nusrat is a Senior Lecturer of English at East West University.