Our fiscal year should be based on Bangla calendar 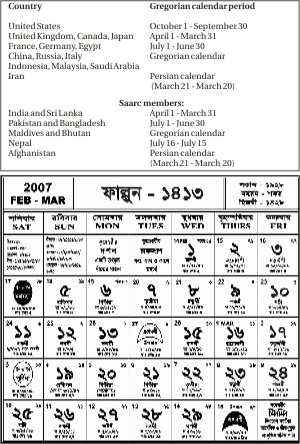 PAHELA Baisakh, the first day of the Bangla year, was recently celebrated with much gaiety and enthusiasm all over the country. The celebrations over, we now ponder the question: How can we go beyond the rituals and make Nobo Borsho more relevant in our national life? The Bangla calendar, as is well known, was codified by Mughal Emperor Akbar in the sixteenth century, primarily on our harvesting cycle or "fasholi shons" to facilitate payment of land revenue by our peasants. Our main focus, therefore, should be to connect it with our national activities in the economic arena.
It is true that, in this era of globalisation, we have to follow the Gregorian calendar virtually for everything. Of course, I have seen some oil-rich Arab countries and Iran strictly follow the Hijri and Persian calendars respectively. We are not as lucky but, in our own way, we do follow different calendars for different purposes. For example, we follow the Hijri calendar for our Muslim festivals, and Hindus, Christians, Buddhists and others celebrate their religious days on the basis of their respective calendars. Our fiscal and academic years, though based on Gregorian calendar, run from July 1 to June 30.
Perhaps the last two areas offer some flexibility to all countries to determine the period on the basis of their tradition and climatic conditions. A quick glance at the table below would show how different countries have determined their fiscal years on the basis of their own objective conditions:

Bangladesh also offers interesting anomalies. While the land revenue is collected by our land revenue department on the basis of the past Bangla calendar year, all other taxes and financial management by the other branches of the government are strictly governed by the existing fiscal year period. The current July-June fiscal year was determined prior to our independence. This time period perhaps is not unsuitable for Pakistan as they do not have a long rainy season like we do. Even in the provinces of Pakistan where they have some rainfall, the rainy season does not start before late July/early August.
In case of Bangladesh, the existing fiscal period directly clashes with our rainy season, which creates problems every year. People familiar with our budget are well aware that our allocations take place in July, i.e. at the beginning of the fiscal year, but the development work is held up due to rain. The work starts when the dry season commences and, as a result, there is always a big backlog.
At the end of the fiscal year, a vigorous effort is undertaken by all the departments and bodies to utilise the allocated funds before they lapse on June 30. In Dhaka city, we are all familiar with these feverish projects. Every year, in the midst of thick monsoon, roads are dug up to install a new storm sewerage, or projects are undertaken for the extension of roads, culverts, canals, as well as telephone, gas and power lines. The costs are intentionally jacked up and the results have always been less than satisfactory. This year, the utilisation of Annual Development Program has been unusually slow, and we should not be surprised to see a record number of such projects in June.
In contrast, if we switch to Bangla calendar year, then our fiscal years would both begin and end in relatively dry season, and all these willful wastages could be avoided. For similar pragmatic considerations, United States switched its fiscal period from July-June to October-September period not too long ago. We have to take objective assessment of our climatic consideration and tradition.
Previously, there were some practical difficulties, as the days in each Bangla month had varied from year to year. That problem was resolved in 1966, when the solar-based Bengali calendar was modified by a Bangla academy committee under the stewardship of celebrated scholar Dr. Muhammad Shahidullah. The Committee had made important adjustments on the basis of some astronomical facts. Consequently, Bangla New year is now celebrated every year on April 14 in Bangladesh.
If we switch, our Bangla calendar would find its rightful place in our official business, and it would be relevant in our national life. Otherwise, our Bangla New Year celebration would remain largely ritualistic, and restricted to only our cultural and literary activities.
When can we make the switch from July- June period to Bangla calendar with minimum dislocation? The answer is, Now. The caretaker government (CTG) will prepare the next budget soon. Since a new democratically-elected government is scheduled to take over next January, this budget, in any case, will come up for review.
Given this scenario, the practical course could be to prepare the next budget for the period from July 1 to April 13, 2009, so that the new government could prepare the budget from April 14, 2009, or Pahela Baisakh, to April 13, 2010. The required adjustment would mean cutting down the next budgetary period from 12 months to 9 ½ months. This minor adjustment would pave the way for synchronising our fiscal year with our Bangla calendar from next year, and people will always remember the CTG for taking this innovative step.

Syed Muazzem Ali is a former Foreign Secretary of Bangladesh.