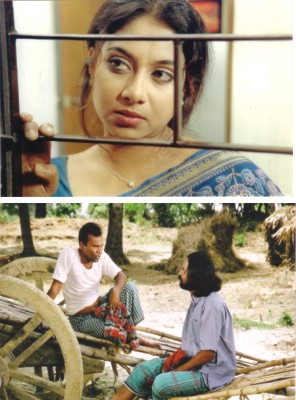 To encourage production of quality films, Bangladesh Film Development Corporation (FDC) honoured the directors and producer of two films Nirontor and Swapnodanay for their recent overseas success. FDC organised the programme in association with Ministry of Information and Banglalink. The ceremony was held at the National Theatre Stage on September 7.
Abu Sayeed and Golam Rabbani Biplab, directors of Nirontor and Swapnodanay respectively and Impress Telefilm, the producer of both the movies won the privilege of the honours. This comes on the heels of other plaudits: Nirontor won the top award at the 11th Indian International Film Festival in Kerala and a special jury award at the India International Film Festival in Goa. Swapnodanay won award at the Shanghai film festival, China.
Secretary of Ministry of Information M. Didarul Anwar was the chief guest and Secretary of Ministry of Home Affairs M Abdul Karim was the special guest at the programme. Eminent actor Razzaq, filmmaker Chashi Nazrul Islam, film producer Gazi Mazharul Anwar and Manager (communication) of Banglalink, Soleman Alam were the discussants at the event. The ceremony was chaired by ANM Badrul Amin, managing director of FDC.
The discussants critically analysed the current scenario of Bangladeshi film industry. Veteran actor Razzaq said, “At present only a few quality movies are being released. Setting aside the division between 'mainstream' and 'alternative' film trend, we should work for the betterment of the movie industry of Bangladesh. It's worth appreciating that TV channels are also producing films in Bangladesh. However, they should release films at the theatres for the mass, instead of airing films for a limited audience on the TV channels.”
Director Chashi Nazrul Islam had a word of criticism for the programme. “If the intention behind arranging the programme is to encourage quality filmmakers, the winners of National Awards should not have been neglected. Earlier many films received awards abroad, but, the directors and producers of those movies were not given any reception by the government,” he stated.
He also addressed the secretaries of Ministry of Information and Ministry of Home Affairs about the problems of the film industry. In his words, “FDC lacks the modern technical facilities; as a result filmmakers have to go abroad for the post production works. The condition of the movie theatres is not up to the mark. Moreover, because of the corrupt members of censor board, vulgar movies are given certificates. And sometimes the corrupt moviemakers add vulgar scenes after getting censorship certificate. When the administration takes any step against such movies, the corrupt filmmakers obtain stay order from the lower court against the administration order.” Chashi Nazrul Islam believes, that if the government intends to develop the standard of cinema, they should address all these questions.
Film producer Gazi Mazharul Anwar said, “Though Bangladesh Film Producers' and Distributors' Association is a member of FBCCI, we don't get any benefits from the government like the other business sectors. Which is why many are losing interest in film production.”
Director of Swapnodanay Golam Rabbani Biplab also urged those involved in film-making to work in conjunction to make more such quality movies.
Director of Nirontor Abu Sayeed called for a change in the process of government grant for films. Moreover, he suggested regular presentation of the National Award in films.
Faridur Reza Sagar received a crest on behalf of Impress Telefilm. He thanked FDC for organising the programme and hoped to produce more quality films in future.