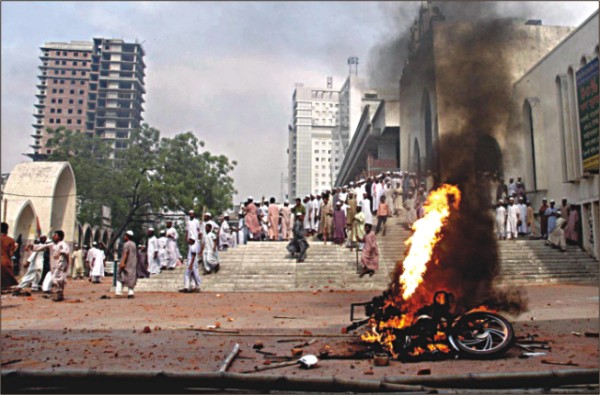 The surrounding areas of Baitul Mukarram National Mosque turned into a battlefield yesterday when members of an Islamic organisation clashed with police leaving over 50 injured including 10 policemen and 15 pedestrians.
Witnesses said the hour-long clash started around 2:15pm when police resisted about 500 activists of Anti-Quran Law Resistance Committee attempting to march towards the office of the chief adviser in a procession after holding a rally on the mosque premises.
Khelafat Majlish and Islami Shashontantra Andolan recently formed the Anti-Quran Law Resistance Committee to protest against the National Women Development Policy approved by the advisers' council recently.
"As police halted their progress, the agitating activists started pelting them with brickbats and broke through the police ring," said pedestrian Mostofa Kamal who took shelter near the mosque during the clash.
Fifteen pedestrians including two children Shaon, 12, and Badhon, 9, were injured.
Employees of nearby shop Mithu Carpets said, "When police locked the gate at the north side, the activists came through other gates and attacked police with bamboo sticks and brickbats."
At one stage, police resorted to charging truncheons and firing teargas canisters to disperse them. Police used around 10 teargas shells.
During the clash, the activists set fire to two motorbikes of law enforcers and damaged over 10 vehicles including two sports utility vehicles of the Islamic Foundation and the Ministry of Religious Affairs.
Chases and counter chases took place between the police and the activists.
Other witnesses said all business establishments were closed for three hours due to repeated attacks of the activists.
The injured activists and pedestrians received treatment from Dhaka Medical College Hospital, Suhrawardy Hospital and different clinics in the area while the policemen were treated at Rajarbagh Police Hospital.
Farid Uddin Ahmed, officer-in-charge (OC) of Paltan Police Station, told The Daily Star, "The unruly attackers injured several policemen, including Assistant Commissioner [AC] Pankaj Roy."
He said they would take legal action against those who were involved in the offence.
Two units of Fire Service and Civil Defence rushing to the spot to douse the burning motorbikes could not do their jobs as the Anti-Quran Law Resistance Committee activists attacked them and chased them away.
People who went to the mosque for Zohr prayers were stuck inside the mosque.
Vehicular movement in the area came to a halt during the clash and created gridlocks on nearby streets which had a knock-on effect on traffic situation on other parts of the city.
Before the clash, the Anti-Quran Law Resistance Committee held a rally on the mosque ground where they demanded resignation of Rasheda K Chowdhury, adviser to the caretaker government.
Terming the National Women Development Policy an anti-Islamic law, they threatened the government of toppling it if it did not amend the policy.
After the clash, the organisation held a press conference at the office of Khelafat Majlish. They claimed police prevented them from carrying out their peaceful activities and injured over 100 activists.
Maulana Abdur Rob Yusufi, Nayeb-e-Amir of Khelafat Majlish, spoke at the press conference among others.