A sin for 'em to live here? | The Daily Star
Skip to main content
বাংলা T

Hindus in Noakhali, Banskhali look for answer after attack by Jamaat
Star Report 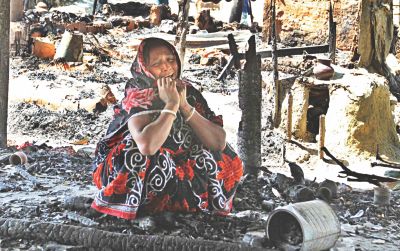 Having lost everything, Nipu Sheel wails sitting on the debris of her house that was set ablaze by Jamaat-Shibir men at Banshkhali in Chittagong. The religious fanatics looted and torched houses and temples of the Hindus in the district on Thursday, following the death sentence to Jamaat leader Delawar Hossain Sayedee. Photo: Anurup Kanti Das

The Hindu families having survived the onslaught from anti-liberation elements now wonder what protection they have in this country.
As the religious minorities in some remote pockets of Chittagong and Noakhali try to come to terms with Thursday's barbaric attacks on their homesteads and temples, there is no let-up in the assaults at other places including Barisal, Bagerhat and Gazipur.
Bangladesh Hindu-Buddha-Christian Oikya Parishad has demanded the government act immediately to resist communal attacks, arrest the culprits, rehabilitate the victims and rebuild the temples.
Moments after Jamaat leader Delawar Hossain Sayedee received death sentence for war crimes, his party, in some cases allegedly aided by BNP supporters, struck terror in the hearts of Hindus on Thursday.
Visiting some neighbourhoods ravaged by Jamaat and its student wing Shibir, these correspondents encountered blank looks of the community members.
Passing three days under the open sky, without sleep and proper food, the families in Rajganj under Begumganj upazila of Noakhali do not know what lies ahead.
â€œIt is our sin to live in this country being Hindu; it is our sin not to flee away,â€ Minoti Rani Das shouted. â€œWe had a happy family. Now I have no shed, no food, no space to cook, no furniture. Now I have only some ashes.â€
This is not only Minoti's story. Around seventy six families have been living under inhumane conditions since Thursday afternoon as the bigots ran riot after the pronouncement of Sayedee verdict.
While millions of compatriots across the country were celebrating following the verdict, some families were losing everything in the village.
Almost all the victims and some other villagers alleged that Jamaat-Shibir-BNP men were directly involved in the attacks.
At least 40 houses, six temples and several dozen shops were burnt and vandalised; valuables and furniture were looted. Police came at least one and half hours latter when it was all over.
While launching attacks, around 250 to 300 rioters were saying Sayedee was sentenced to death because of the deposition of Hindu witnesses, locals said. The number of attackers varied from spot to spot.
â€œSayedee got death sentence because of you. You cannot stay in this country,â€ Bablu Bhuiyan, whose two houses were damaged, quoted one attacker as saying.
Gathered since around 10:00am, the fanatics were chanting slogans including Sayedee saheber kicchu hole, jolbe agun ghore ghore (fire will be set to each and every house, if something happens to Sayedee). Many were wearing masks.
Abdul Hashem, a tea-stall owner of Rajganj Bazaar, said almost all the attackers were young and he could identify at least three persons actively involved with Jamaat. Two of them run a pharmacy and a grocery at the bazaar.
Many Hindu families took shelter in nearby houses of Muslims during the attacks, said Benu Ranjan Chowdhury, whose house was burnt.
Some victims alleged that Harunur Rashid, chairman of Rajganj union parishad and general secretary of local BNP unit, played a murky role.
â€œHad the chairman taken immediate steps, the mayhem wouldn't have occurred in such massive scale,â€ said Bimol Kanti Acharjee.
However, Rashid refuted the allegations, saying, â€œThe attack was launched by some outsiders and street urchins.â€
Mohammad Alauddin, acting ameer of Noakhali district Jamaat, said, â€œThe fans of Sayedee might have resorted to violence. Besides, a feud over land could have triggered the incidents. I've heard there was rivalry among some families.â€
He denied Jamaat's complicity.
Mahbubur Rashid, Noakhali superintendent of police, said, â€œIt is clear to us that the anti-liberation force launched the attack. Maximum punishment for perpetrators will be ensured.â€
Like Rajganj, Chittagong's Banshkhali also bears marks of vandalism and arson led by Jamaat and Shibir on Thursday.
The attackers hacked to death 60-year-old Dayal Hari, said locals.
Dayal had come to see his daughter at her in-law's. As the armed bigots started the rampage, he hid at the latrine.
But they broke the door, dragged him out and hacked him. The man somehow escaped and jumped in the adjacent pond but the attackers caught him and hacked him again.
Dayal was rushed to Chittagong Medical College Hospital where physicians declared him dead.
Sunil, another Banshkhali resident, said some one thousand attackers stormed the houses. They carried machete, sticks and other sharp weapons and used gunpowder to burn eight houses.
At least 70 people are now homeless.
Nipu Sheel did not understand why her house and cowshed were burnt to ashes on Thursday.
â€œThey beat us and set our houses ablaze,â€ she said. â€We didn't understand what's was wrong. They looted our belongings. The cattle were burnt to death. We were lucky enough to have our kids saved.â€
Rani Dash is one of many injured in the assaults; she suffered right arm fractures.
Sheikh Fakhruddin Chowdhury, mayor of Banshkhali Municipality, local BNP-Jamaat leaders instigated the mayhem.
In Bagerhat, some criminals set fire to Dumuria Sarbojanin Puja Mandir in Ramchandrapur union in Morelganj upazila around 1:00am yesterday.
The house of Narayan Chandra Bashu Chowdhury, president of Banagram union AL, was set afire around the same time, police said. Another house of a Hindu family was torched in Baharbula village.
Local administration imposed the section 144 banning all sorts of gathering and agitation at Failahat Bazar from 9:00am to 6:00pm yesterday as both local AL and Jamaat called programme at the spot around 2:00pm.
Unidentified people damaged eight idols of Sarbojanin Durga Mandir at Gaurnadi upazila in Barisal and idol of Saraswati at a temple near Kashimpur Bazar in Gazipur yesterday.
In Gaibandha, police arrested three Shibir activists yesterday in connection with anarchy over the last two days at Sundarganj upazila.
The Jamaat-Shibir rioters in Thursday and Friday destroyed 19 shops, six houses and two temples at Belka, Dhupni and Bangsher bazaar of the district.
The administration has deployed two platoons of BGB and one platoon reserve force of police and imposed the section 144 to avert any untoward incident.
Pankaj Karmakar and Nurul Amin
from Noakhali and Arun Bikash Dey, from Banshkhali