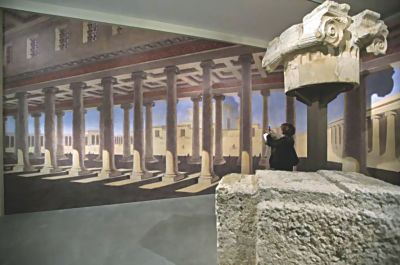 More than four years in the making, the largest exhibition ever staged by Israel's national museum, dedicated to the life of King Herod, has generated unprecedented excitement both at home and abroad.
Entitled "Herod the Great: The King's Final Journey", the exhibition follows in the footsteps of Herod's funeral cortege 2,000 years ago, when his body was carried from the royal winter palace near Jericho to his resting place on a man-made hill close to Bethlehem.
The exhibition was made possible by the discovery in 2007 of what is assumed to be Herod's tomb at the hill fort of Herodium. An Israeli archaeologist, Ehud Netzer, found the burial chamber after a search that began 35 years earlier.
More than 250 artefacts excavated from the two sites, weighing 30 tonnes in total and including three elaborately decorated limestone sarcophagi and a bath carved from a single slab of stone, have been brought to the Israel Museum in West Jerusalem for the nine-month show.
But the sites of Herod's death and his entombment are both located in the occupied Palestinian territory of the West Bank, outside the recognised borders of Israel.
Palestinian Authority officials, backed by some Israeli archaeologists, have complained that, in excavating the sites and transferring the artefacts out of the West Bank, Israel has violated international law.
Hamdan Taha, the PA official responsible for antiquities, denounced the exhibition, saying: "This is just the latest example of an Israeli policy to use archaeology to cement its political claims to land that belongs to the Palestinian state. This is an assault on the Palestinians' cultural heritage."
The Herod exhibition has captured the imagination of many Israelis, despite the king's Biblical reputation as a murderous villain and a lackey of the Roman empire. During his 33-year reign, which began in 37BC, Herod left a legacy of grandiose building projects, the ruins of which are today major tourist attractions.
Two have been particularly influential on Israel's national narrative: the Masada fortress complex, next to the Dead Sea, later became the reputed site of a famous last stand by Jewish rebels against the Roman empire; and part of Herod's massive expansion of the Second Temple in the Old City of Jerusalem survives in the form of the Western Wall, Judaism's holiest site.
Israeli claims to control the site of the Haram al-Sharif, a compound of mosques including al-Aqsa that is next to the Western Wall, derive from a common belief among Israelis that the mosques were built over the ruins of the Second Temple.
The question of sovereignty of the Haram became one of the sticking points that led to the collapse of the Camp David talks between Israel and the Palestinians in 2000 and later triggered the Second Intifada.
PA officials have compared the Herod exhibition to the historical plunder of archaeological treasures by former colonial powers.
In one of the most notorious cases, Britain shipped a section of the Parthenon, known as the Elgin Marbles, from Athens to the British Museum in London in the 19th century. Greece has been lobbying unsuccessfully for the return of the Marbles for decades.
Nonetheless, the Israel Museum has sought to downplay concerns about the use of the antiquities.
The PA joined the United Nations science and cultural body UNESCO last year. Taha said his department was preparing to seek World Heritage status for several archaeological sites in Area C, including Herodium, as a way to "protect them from further Israeli misuse".
Palestinians have also complained that Israel's continuing stranglehold on archaeological sites in the West Bank and East Jerusalem has undermined the Palestinian economy.
Many of the region's most important touristic sites are under Israeli control in the occupied territories, including Jerusalem's Old City, Jesus' presumed baptism site on the River Jordan, the shoreline of much of the Dead Sea, and Sebastiya, a regional capital destroyed and rebuilt by successive empires.