All eyes on Sayedee 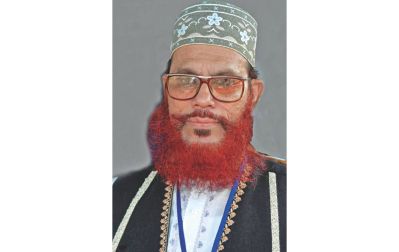 Today, the International Crimes Tribunal-1 finally delivers the verdict in the case against Jamaat-e-Islami Nayeb-e-Ameer Delawar Hossain Sayedee in connection with crimes against humanity committed during the Liberation War.
Even though it was the first war crimes case to go on trial at the tribunals, it would be the third verdict to be delivered.
The 18-month-long proceedings of the case at Tribunal-1 had to negotiate difficult hurdles, including the â€œSkype controversyâ€, reconstitution of Tribunal-1 and rehearing of closing arguments.
Like the day the verdict in Jamaat leader Quader Mollah's case was delivered, Jamaat-e-Islami called for countrywide dawn-to-dusk hartal today assuming that "an unjust punishment would be awarded".
Meanwhile, youths of the unprecedented movement, demanding capital punishment to all war criminals, gathered at the Gonojagoron Mancha at Shahbagh yesterday evening to resist Jamaat and student body Islami Chhatra Shibir's possible violence and covert attacks.
Shahbagh protesters said they would continue their demonstration all night until the verdict is delivered.
They said they would celebrate and return home in elation after Sayedee had been awarded the death penalty. They would continue with their agitation if the verdict fell short of their expectations, they added.
Yesterday, Tribunal-1 Chairman Justice ATM Fazle Kabir said, â€œThe judgement has already been prepared. Let the matter be fixed for tomorrow [today] for the judgement."
A former lawmaker elected with Jamaat ticket, Sayedee, 73, was facing 20 charges of crimes against humanity including looting, killing, arson, rape and forcefully converting people into Muslims during the Liberation War.
Nayeb-e-Ameer (vice-president) Sayedee was indicted on October 4, 2011.
On December 6 last year, the court had said it kept the case awaiting verdict delivery. It decided to rehear the closing arguments following reconstitution of Tribunal-1 on December 13.
On January 29, the three-member Tribunal-1, led by Justice Kabir with members Justice Jahangir Hossain Selim and Justice Md Anwarul Haque, put Sayedee's case back on awaiting verdict delivery after conclusion of the closing arguments.
While wrapping up its arguments in the case, the prosecution sought capital punishment for Sayedee claiming that it had proved all but one of the charges brought against him.
Defence counsels claimed that the prosecution had failed to prove any of the charges brought against him.
A total of 28 people, including the investigation officer, testified against Sayedee while the statements of 16 witnesses made before the investigation officer were adopted as evidence by the Tribunal-1.
Seventeen people testified for Sayedee as defence witness.
CHARGES
One of the charges cites Sayedee's involvement in the killing of three Bangalee government officials in the then sub-division of Pirojpur and throwing their bodies in the Baleshwar river.
Foyzur Rahman Ahmed, father of eminent writer Humayun Ahmed and noted educationalist-writer Muhammad Zafar Iqbal, was among the three. He was a police officer.
The other two were deputy magistrate Saif Mizanur Rahman and sub-divisional officer (in-charge) Abdur Razzak.
During the Liberation War, Sayedee along with other armed Razakars kept Bipod Saha's daughter Vanu Saha confined to their home at Parerhat under Pirojpur Sadar Police Station and regularly raped her there.
Being a member of collaborator force Razakar, Sayedee exercised his power to convert 100-150 Hindus of Parerhat and other villages into Muslims and forced them to go to mosque to pray.
On May 4, 1971, Sayedee as a member of Peace (Shanti) Committee informed the Pakistan army about a secret gathering of a group of people behind the Madhya Masimpur bus-stand in Pirojpur and took the army to the spot. The army killed 20 people.
On that day, Sayedee along with his accomplices looted valuables of members of the Hindu community living in Masimpur Hindu Para. They also set the houses of Hindus ablaze and opened fire on the people who were fleeing the scene. At least 13 people were killed then.
THE TRIAL
Sayedee was arrested on June 29, 2010 in a case filed in connection with hurting religious sentiment of Muslims.
He was shown arrested in the war crimes case later.
The investigation agency, designated to deal with war crimes probes, handed over its report on Sayedee to the prosecution on May 31, 2011, and the prosecution on July 11, 2011, submitted formal charges against Sayedee.
The Tribunal-1 took the charges into cognisance on July 14, 2011.
He was indicted on October 4, 2011.
On November 20, 2011, the prosecution placed its opening statement and started to produce their witnesses on December 7, 2011.
The defence began producing their witness on September 2, 2012.
Following repeated failure to produce witnesses, the Tribunal-1 closed defence witness testimony recording.
The defence and prosecution completed placing their closing arguments between November 5, 2012, and December 6, 2012.
The Tribunal-1 reheard the closing arguments between January 13, 2013, and January 29, 2012.
Tajul Islam, a defence lawyer of Sayedee's case, told The Daily Star last evening that they were yet to decide whether they would show up for verdict delivery today due to the hartal.