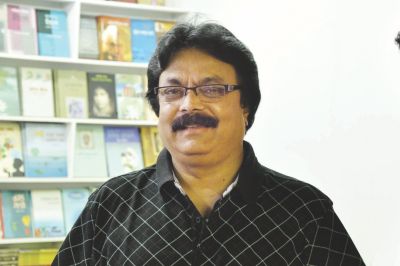 Lutfor Rahman Riton is a renowned in the field of children's literature, with many popular books of stories, novels, poems and rhymes under his name. Also a translater, Riton's repertoire is the strongest as a rhymester, with his popularity also spreading to Kolkata.
Like each year, several new books by the author have come out at the Ekushey Boi Mela. Chondraboti Academy has published two children's rhyme books -- â€œGonesh Dhonesh Roneshâ€ and â€œBhooter Bachchaâ€, as well as a memoir titled â€œNayan Tomarey Pae Na Dekhite Royechho Nayane Nayaneâ€. â€œBholamon Piring Piringâ€ -- a collection of rhymes for adults, has been published by Ananya Prokashoni.
A new teen novel -- â€œArjunâ€ -- has also been published by Ananya. Royal Publishers has brought out a story book -- â€œMontrir Golpo MP'r Golpoâ€, while Onarjyo has published a rhyme book titled â€œJoy Bangla Joy Mujiburâ€.
Riton was won several honours for his works, including hte Bangla Academy Award. However, the writer considers the admiration of the readers as his greatest achievment. He says, â€œI write for the readers, especially for children. So I consider the admiration from my readers a great achievement.â€
Lutfor Rahman Riton started writing at an early age. Inspired by the reading habits of his family members, he also immersed himself in the world of words, and eventually picked up his pen to jot down his thoughts. His first saw his work being published in the daily Ittefaq.
For the past few years, the author has been living in Canada with his family. However, he comes to Bangladesh before February, and stays through the duration of the Ekushey Boi Mela. He writes all his new material overseas.
Riton is a regular at the fair, roaming around everyday in the premises. He also makes time to host a daily book show for Channel i. Like many others, the author expressed his satisfaction at this year's fair being only for the publishers.
Asked what his wishes were, Lutfor Rahman Riton replied, â€œI want to keep on writing till my last breath. I want to write more good books for children.â€