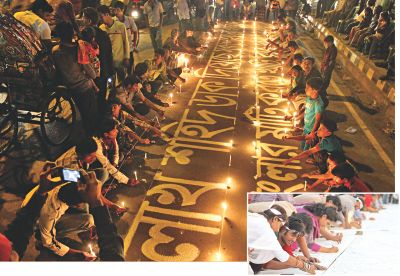 The nonstop mass movement at Shahbagh and elsewhere appears to have forced the government to seriously consider further amendment to the International Crimes (Tribunals) Act-1973 to provide for appeal against inadequate sentence in war crimes cases.
The original law of 1973 had no provision for the government to appeal against any verdict of the International Crimes Tribunal (ICT), set up to try the war criminals of 1971.
In 2009, the law was amended to give the government the right to appeal to the Appellate Division of the Supreme Court against a war crimes verdict in the event of â€œan order of acquittalâ€.
Despite this amendment, the government -- which represents the victims in war crimes cases -- does not have the right to appeal in the case of inadequate sentence.
The defence, however, enjoys the right to appeal against any â€œconviction and sentenceâ€ in both the original and the amended law.
This difference in the rights to appeal has come to the fore following the verdict in Jamaat leader Abdul Quader Mollah's case.
On February 5, the ICT-2 sentenced Mollah to life in prison on two charges and 15 years each on three other charges of crimes against humanity.
The tribunal acquitted him on one charge.
As per the ICT act, the government cannot seek capital punishment, instead of the jail terms given to Mollah, though two grievous charges against him of killing around 350 Bangalees have been proved.
Now, against the backdrop of ongoing mass demonstrations for death penalty to Mollah, the government is considering a fresh amendment to the ICT act.
Talking to The Daily Star yesterday, State Minister for Law Qamrul Islam said the government would soon bring change in the ICT act to allow appeal against inadequate sentence by war crimes tribunals.
The government plans to amend section 21 (2) of the law, as demanded by people and legal experts, he added.
Hours after the ICT-2 delivered the verdict, people from all walks of life started non-stop demonstrations at Shahbagh intersection, demanding death penalty to Mollah.
Qamrul hoped that a bill on the amendment would be placed in the current session of parliament.
Replying to a query, he said the government would not incorporate any provision giving the victims or their families the right to file an appeal against any ICT verdict. The government would continue to represent them at the trial.
The state minister said that for now the government was preparing to file an appeal against a portion of the verdict that acquitted Mollah of a charge of mass killings in Keraniganj during the Liberation War.
Meanwhile, some eminent jurists have observed that an amendment to give the government the right to appeal against inadequate sentence or acquittal will not be enough to ensure adequate punishment to the offenders.
Talking to The Daily Star yesterday, Shahdeen Malik urged the authorities concerned to think thoroughly and consult as many legal experts as possible before amending the law.
He also said the government must take into account the popular demand and find a solution.
Another jurist, who requested anonymity, said the government must include more provisions in the ICT act to remove its weakness and loopholes and to ensure justice in the war crimes cases.
He said that a provision must be incorporated in the act so that the victims and their family members, along with the government, can appeal against inadequate sentence or acquittal.
Another provision has to be included for trying and punishing the political parties like Jamaat-e-Islami and its war-time student front Islami Chhatra Sangha that led the heinous crimes like acts of genocide, killings, rapes, lootings and arsons, he said.
If those political organisations are tried, their activities may be suspended forever or a certain period as punishment, the legal expert said, adding that the accused had mostly committed the crimes against humanity under the banner of political organisations.
Citing article 152 of the constitution, he said â€œpolitical partyâ€ includes a group or combination of persons who operate within or outside parliament under a distinctive name and who hold themselves out for the purpose of propagating a political opinion or engaging in any other political activity.
According to section 11 of the Penal Code of Bangladesh, â€œthe wordâ€ person includes any company or association, body of persons whether incorporated or notâ€, he said.
The legal expert mentioned that the International Crimes Tribunal-2 has found that the crimes against humanity were committed mostly by persons under the banner of political parties.
He added the constitution has already protected the International Crimes Tribunal Act, 1973, and accordingly any amendment to this law will automatically be protected.
Nobody can challenge the ICT act or its amended provision as per article 47 of the constitution, he said, adding that earlier several writ petitions were filed with the High Court challenging the act. But the court summarily rejected the petitions.
The ICT act, enacted in 1973, was amended twice by the present government.
The amendment made in 2009 also incorporated the provision for trying any individual or group of individuals for the crimes against humanity. The amendment in 2012 included, among other provisions, the one for reducing the time for filing appeal to 30 days from 60 days since the pronouncement of verdict.
Additional Attorney General MK Rahman, also chief coordinator of the prosecution team at the ICT, said the government would amend the ICT law in the light of the constitutional provision of â€œequal right to protection of lawsâ€.
The accused in the crimes against humanity cases have the right to appeal against any sentence awarded by the tribunal, but the government cannot, he said.
A prominent legal expert said the law ministry should have noticed this limitation in the ICT act much earlier.
The constitutional provision for pardoning the condemned accused in the cases of killings of Bangabandhu Sheikh Mujibur Rahman, and the four national leaders in Dhaka Central Jail in 1975, and the 1971 crimes against humanity should have already been repealed, he said.