Three killed as muggers push them off train 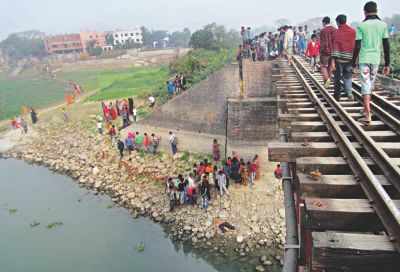 Onlookers surround the body of a person, who was among the four thrown from a running train by robbers early yesterday, near a rail bridge in Badughar of Brahmanbaria. Of the four, three people died while the other suffered critical injuries.Photo: Banglar Chokh

Three passengers of a train including a woman were killed, while one was severely injured when a gang of muggers pushed them off a running train in sadar upazila yesterday.
The deceased were identified as Khayer Miah, 40, Shud Miah, 50, and Shahana Begum, 50, of Merashani village under Bijoynagar upazila of the district.
The injured Md Rubel Miah, 25, was taken to Brahmanbaria Sadar Hospital for treatment.
The Dhaka-bound Titash Commuter Train reached Pagachang station around 5:20am when eight muggers boarded the train and started robbing the passengers, Rubel told The Daily Star.
At one stage, they pushed four passengers off the train at different points between Pagachang and Kurulia bridge, he added.
On information, police rushed to the spot and rescued Rubel and recovered the bodies of the three.
They were going to Dhaka for medical check up for the purpose of immigration, Rubel said adding, they belonged to the same village.
A case has been filed with Akhaura Government Railway Thana, said Abul Kalam Azad, officer-in-charge (OC) of the station.
There were four policemen in the last compartment of the train and had no knowledge of the robbery taking place, Azad added.
â€œThe compartments are not connected by corridors, which was why police could not move around to guard the other compartments,â€ the OC said.
Md Jahidul Islam, additional superintendent of Brahmanbaria Police, said law enforcers were trying to track down the criminals.