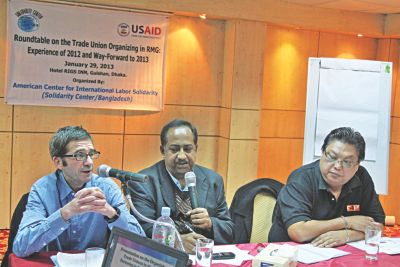 The continuation of duty-free export under US's GSP scheme depends on the Bangladeshi government and industry owners, an official of American Center for International Labor Solidarity (ACILS) said yesterday.
"It is really up to the government of Bangladesh and employers to decide if they want to continue to get GSP facility. It's really not the US government, not AFL-CIO," said Alonzo Suson, country director of American Center for International Labor Solidarity (ACILS).
ACILS is affiliated with American Federation of Labour and Congress of Industrial Organisations (AFL-CIO), the largest US trade union organisation.
"All they have to do is come up with a binding and comprehensive work plan that has evidence of immediate and substantial implementation," Suson said.
Suson's remark comes amid mounting concerns over the extension of the generalised system of preferences by the US, after the US Trade Representative sought a report from the government about the progress in labour standards and compliance in factories.
The USTR sent the letter following the Tazreen fire on November 24 last year that claimed at least 112 lives.
"The USTR wants the update by January 31 as there is now a call that the GSP must be suspended," said Suson at an ACILS organised-discussion on trade union in garment factories at Rigs Inn.
For a fact finding mission, a team from the US will visit Dhaka prior the hearing on Bangladesh's GSP eligibility in March.
In 2007, AFL-CIO asked the US government for removal of GSP facility, citing unwillingness of the Bangladesh government and industry owners to enforce labour laws, including the formation of trade unions at firms.
Suson said Bangladesh needs to fix the issues such as legalising trade unions at factories, ensuring fire safety at factories, revision of labour laws and insurance hike for workers.
Some 8 applications for trade union registration at factories remain pending, he said.
Only 3 trade unions got registration from Department of Labour in the last five years, according to ACILS.
"All the government has to do is to give a work plan to fix these problems. That will satisfy the US government," said the ACILIS official.
He also said the global apparel brands need to be strict in auditing and monitoring, while adding that brands should not negotiate too hard with garment owner to buy clothes at low prices.
"Low prices put factories under pressure. Factory owners can not invest in ensuring labour compliance. A lot of investment is needed for the improvement of fire safety," he said.
Citing McKinsey's forecasts for Bangladesh's apparel industry, Rob Ways of International Labour Organisation (ILO) in Bangladesh, said the country can not become the number one apparel destination for global buyers without any improvements in labour compliance standards.
Babul Akhter of Bangladesh Garment & Industrial Workers Federation said the petition for cancelling GSP facility was filed due to the repression the workers faced from the government and owners.
Abul Hossain, president of Textile Garments Workers Federation, said the issue of labour rights should not have been tagged as condition for GSP.
"Labour rights should never be a condition. It is a universal right -- and can not be a condition for the continuation of GSP facility."
AKM Nasim, senior legal counselor at the ACILIS, moderated the discussion.