Economy stable, but risks lurking within

CPD says GDP growth will be more than 6pc, but below govt's target
Star Business Report 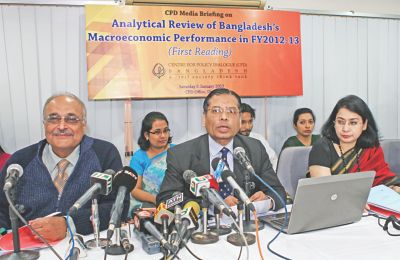 The country's macro-economic situation in the first half of the current fiscal year is relatively stable compared to that in the previous year, said Centre for Policy Dialogue (CPD) yesterday.
But the private think tank said this stability is underpinned by a number of risks.
Analysing the overall trend of the economy, the CPD said the government has been trying to maintain the macro-economic stability alongside a moderate growth.
â€œIt appears that the government has settled for a 'second best' option by holding on to macroeconomic stability with moderate economic growth, investment and employment prospects,â€ CPD Executive Director Mustafizur Rahman said at a press conference at his office in the city.
â€œEven this modest ambition could come under serious challenges in view of the looming uncertainties in the political front."
He also warned that any prolonged uncertainty under the circumstances would have serious implications on the performances of the economy.
CPD Distinguished Fellow Debapriya Bhattacharya said there might be difference of opinion on different political issues among the politicians but they should have a consensus on economic issues for the best interest of the country.
Rahman said the country might fail to achieve the government's GDP growth target at 7.2 percent in the current fiscal year due to falling exports.
The multilateral donors have already forecast Bangladesh's economic growth at around 6 percent, while the central bank said it would be between 6.1 percent and 6.4 percent.
"We think the GDP growth would be more than 6 percent," said Rahman.
He also pointed to various risks the economy faces.
He said, though revenue collection in the last four consecutive years was good, it is much slower in the current fiscal year.
In the first five months of the current fiscal year, the National Board of Revenue's earnings were 15.1 percent against the whole year's target of 18.9 percent.
The growth has to be 21 percent to 22 percent in the next seven months to achieve the revenue target, which will be hard to attain, said the CPD researcher.
On the expenditure side, the government's spending in the current fiscal year has increased, and the rise in spending on interest payment was also higher.
Rahman said, if on the one side expenditure rises, and on the other there is a shortfall in revenue earnings, the bank borrowing by the government may cross the target set in the budget.
"Surprisingly, the NBR has been (verbally) instructed to collect an additional amount to the tune of Tk 8,000 crore. It will be an impossible task."
Rahman also said the government itself is also expecting some pressure in terms of fiscal management.
State-run Bangladesh Petroleum Corporation, which is the sole agent to import petroleum products, has already sought Tk 11,700 crore to pay its debt.
Up to December 13 last year, the net government borrowing from banks increased sharply to Tk 10,700 crore.
The CPD executive director said the government's borrowing might be Tk 10,000 crore more than the budget target if foreign aid and the sale of national savings instrument fail to reach the target.
Rahman also said, if the bank borrowing goes up, it might increase inflation and the private sector credit might have the crowding out effect.
The economist said inflation has decreased due to a fall in rice prices. But if the production is hampered in future, it might affect inflation.
He said, although inflation has gone down, the spread in bank interest rates is still high.
The interest rate spread -- the difference between the banks' deposit rates and lending rates -- needs to be brought down to below 5 percentage points to maintain a competitive and investment-friendly banking sector, said Rahman.
He also said the central bank's new provisioning and rescheduling procedures for bank loans faced resistance from banking and private sector actors.
Rahman also welcomed the central bank's steps to improve the financial sector's governance.
He said the Hall-Mark scam, lax supervision of the banking sector -- both internal and external, and the delay in appointing directors in the state banks have undermined the financial sector management in FY13.
Rahman said the central bank might continue its tight monetary policy when it announces the half-yearly stance at the end of the current month, in order to contain inflation.
He called for more coordination between the finance ministry and Bangladesh Bank for macroeconomic stability.
The researcher also stressed reining in inflation, which could go up following the latest rise in fuel prices and the government's borrowing from banks.
He also said the policymakers should pay serious attention to illicit financial outflow.
Bangladesh loses around $3.1 billion or $1.4 billion each year due to transfer mispricing, trade mispricing and money laundering, said Rahman, citing different studies.
CPD Distinguished Fellow Bhattacharya said the illicit outflow of money goes up in the first and last days of the government. It hinted that a vicious political nexus could be behind this capital flight.
The CPD organised the programme to review Bangladesh's macro-economic performance.