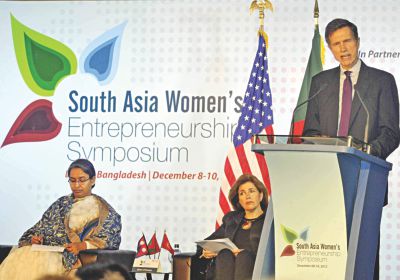 The small and medium enterprises that are run by women guarantee faster economic growth, but access to finance remains a major barrier to women entrepreneurship, said Melanne S Verveer, US ambassador-at-large for global women's issues.
Verveer spoke at South Asia Women's Entrepreneurship Symposium that began yesterday in Dhaka to create cross-border linkages among women entrepreneurs in the region.
Some 120 participants from 11 South and Central Asian countries attended the event to discuss the challenges and opportunities faced by women-owned SMEs.
"SMEs are the engines of economic growth. It is a fact that women-run SMEs drive economic growth and create jobs. This is true in my country and it is true around the world," Verveer said at the event at Ruposhi Bangla Hotel.
The US Department of State organised the symposium attended by participants from Bangladesh, India, Pakistan, Nepal, Bhutan, the Maldives, Sri Lanka, Myanmar, Afghanistan, Kyrgyzstan and Kazakhstan.
"If you want to drive GDP, the best investments that can be made are women-run SMEs," Verveer said.
But access to finance acts as a major challenge for women entrepreneurs to grow, she said.
She also said microcredit has lifted millions of poor women around the world out of poverty and enabled them to earn, support families and pay back the loans.
"Yet the significant gender gap to finance remains painfully acute as it affects what we might call the missing middle of the small and medium enterprise sector, which is mostly women-run and has the best growth and job creation potential," said Verveer.
In addition, barriers like a lack of access to markets, training, mentors and technology act as impediments to women entrepreneurship.
Women also often confront discriminatory regulations and a lack of inheritance and property rights, she said.
Verveer also stressed investing in girls' education and favoured women's representation at the policymaking level.
"As your businesses grow, we are confident you will speak out against corruption when you see it. As leaders in businesses, we know that you will also work to strengthen democratic institutions and civil society," said Verveer.
Foreign Minister Dipu Moni said the government has enacted a number of new laws for women and children and adopted a gender-responsive budget.
The government has framed 'women development policy' to ensure equal opportunity for men and women.
The government also took various initiatives to promote women entrepreneurship.
The government has kept 10 percent of small enterprises' fund for women entrepreneurs at Bangladesh Bank and ensured preferential treatment to them at commercial banks, she said.
"Strong networks among women entrepreneurs will certainly enhance their ability," said the foreign minister.
She said Prime Minister Sheikh Hasina has joined a global initiative by US Secretary of State Hillary Rodham Clinton.
Under the initiative, women's representation in Bangladesh's parliament will be raised to 30 percent from present 20 percent, said Dipu Moni.
US Assistant Secretary of State Robert O Blake said the summit will help women entrepreneurs foster cross-regional collaboration and build multilateral connections.