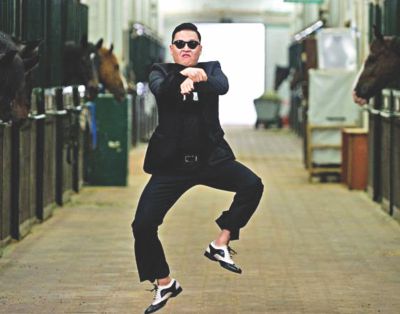 South Korean megastar singer Psy, famed for his runaway hit "Gangnam Style", apologised yesterday for anti-American performances a decade ago, ahead of a planned show before US President Barack Obama.
In 2002 the singer smashed a model US tank at a protest over the American military presence in South Korea and the death of two South Korean teenagers who were struck by a US military vehicle.
Two years later he joined a performance of a song where he used controversial expletive-laden lyrics calling for the killing of "Yankees who have been torturing Iraqi captives".
"Kill their daughters, mothers, daughters-in-law, and fathers. Kill them all slowly and painfully," he rapped.
Psy performed the lyrics at a concert after a South Korean evangelist was beheaded by Islamist militants in Iraq during the US-led conflict, after Seoul rejected their demand to halt a troop deployment to the country.
"I will forever be sorry for any pain I have caused by those words," the 34-year-old singer said in a statement.
He said the performance and lyrics were part of a "deeply emotional reaction" to the war in Iraq and the death of the two schoolgirls that was "part of the overall anti-war sentiment shared by others around the world".
"While I'm grateful for the freedom to express one's self, I've learned there are limits to what language is appropriate and I'm deeply sorry for how these lyrics could be interpreted."
"I have been honoured to perform in front of American soldiers in recent months -- including an appearance on the Jay Leno show specifically for them -- and I hope they and all Americans can accept my apology."
News reports of the performances surfaced in the United States days before the pop sensation's planned performance at an annual "Christmas in Washington" concert on Sunday, which the Obama family is scheduled to attend.
Psy's "Gangnam Style" has become the most-watched video of all time on YouTube in just five months, garnering almost 906 million views.
The video has inspired thousands of online imitations of Psy's famous horse-ride dance, and flash mobs of tens of thousands in Paris, Rome and Milan.