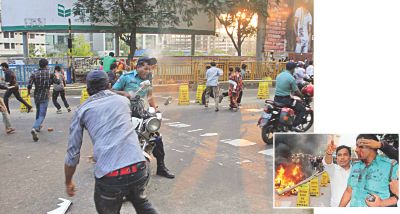 Jamaat and Shibir men attack a policeman at Sonargaon intersection in the capital yesterday afternoon during their rampage in the area. Inset, the policeman who was riding the motorbike is seen bleeding from the head while the bike is burning in the background. Photo: STAR