No more testimony to defend Sayedee 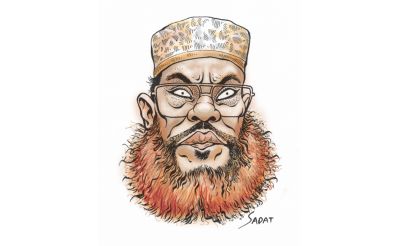 International Crimes Tribunal-1 yesterday closed recording the testimonies of defence witnesses for Jamaat leader Delawar Hossain Sayedee in connection with crimes against humanity after the defence failed to produce witnesses.
Now only the closing statements of the prosecution and defence are left before the tribunal delivers the verdict in the case against the Jamaat-e-Islami nayeb-e-ameer.
The tribunal on Monday had asked Sayedee's counsel to produce the remaining four witnesses yesterday.
But Sayedee's counsel produced only one witness, Ganesh Chandra Saha, who was actually listed as a prosecution witness and was supposed to testify against Sayedee.
After his cross-examination, the tribunal asked the defence whether they would produce any more witnesses for Sayedee.
Defence counsel Mizanul Islam replied in the negative.
“Defence witness production closed,” said tribunal Chairman Justice Md Nizamul Huq.
Mizanul then said the defence had filed a petition in this regard.
“You may file 500 petitions but cannot produce any more defence witnesses,” the tribunal said.
Earlier, the tribunal had warned the defence several times about its dillydallying in producing witnesses and wasting time over the matter.
Ganesh, son of martyr Bhagirathi Saha, yesterday during cross-examination said Sayedee did not play any role in the killing of his mother. It was rather the Pakistani army which killed her during the Liberation War.
Bhagirathi, who worked in a military camp in Pirojpur, worked as a mole for freedom fighters.
On the basis of her information, an operation by the Pakistani army at Baghmara was foiled, leaving 10 army men killed.
Bhagirathi did not return home from work that night.
Ganesh, who was nine years old then, heard that Bhagirathi had been dragged to a riverside in a car, to which she was tied to around the waist and hands.
“I saw the mutilated body of my mother. Five people were sitting in the car. They threw the body into the river,” Ganesh said, adding that among the five, four had weapons and were in khaki uniforms.
Ganesh said Sayedee's sons Rafique Sayedee had asked him in the Bangla month of Baishakh whether Sayedee had killed Bhagirathi.
Ganesh had replied in the negative.
“Then I came to testify for Sayedee,” the witness said.
During the cross-examination, Ganesh said, “Some people from court [members of investigation team] went to my house last Falgun [Bangla month].”
Prosecutor Haidar Ali then produced investigation officer of Sayedee's case Helal Uddin before the witness and asked whether the officer had gone to his house for a statement.
“He may have also been there,” the witness said.
Haidar Ali then made a suggestion that the witness, having received financial help from the accused, testified for Sayedee.
“It's not true,” Ganesh said.
He went on and said Sayedee's son had asked him whether he had filed any case against Sayedee and when he replied in the negative, Sayedee's son asked the witness if he could testify for Sayedee.
On his request, he came to the tribunal to testify, the witness said.
Prosecutor Haidar Ali later told The Daily Star that they could not produce Ganesh as their witness as he could not be found then.
“Our claim that prosecution witnesses were intimidated by the defence was substantiated today,” he said, adding that he would pray to the tribunal to remove Ganesh from the prosecution witness list.
The proceedings of the case were adjourned until November 5.
Later, the defence counsel of another war crimes accused, BNP leader Salahuddin Quader Chowdhury, completed cross-examining prosecution witness Nizamuddin Ahmed, who testified against the accused on Monday.