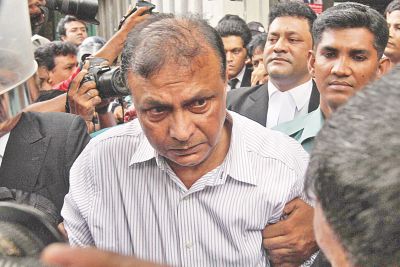 The High Court yesterday granted bail to Destiny Group President Lt Gen (retd) M Harun-Ar-Rashid for two months in two money laundering cases, on condition that he will no longer be involved with the group.
The Anti-Corruption Commission (ACC) filed the cases with Kalabagan Police Station on July 31 against 22 top officials of the group, including Harun, over laundering of Tk 3,285.26 crore.
The court granted the bail on the grounds of his ill-health and the fact that he is a freedom fighter, said the court in the order, adding that he cannot even “approach” any of the group's offices.
According to the conditions in the order, Harun cannot influence the investigation into the cases, communicate with any of the co-accused “by telephone” or otherwise, and make any public statement about the cases.
The HC ordered Harun to cooperate with the investigation officer during the investigation and restricted him from leaving the country without permission from the lower court where the two cases are proceeding.
If Harun breaks any of the conditions, it will automatically cancel the bail, the court said. The bail “will not be regarded as an example” for the other accused to get bail in the cases, added the court.
The bench of Justice AHM Shamsuddin Chowdhury Manik and Justice Farid Ahmed passed the order after hearing two appeals filed by Harun on October 11 against the lower court's orders that rejected his bail prayers and sent him to jail the same day.
In the appeals, Harun sought bail on the grounds of his ill-health.
Khurshid Alam Khan, the ACC's counsel, said the commission was yet to decide whether it would file an appeal with the Supreme Court against the HC order, adding that it should challenge the order.
Advocate Abdul Matin Khasru appeared for Harun, while the additional attorney general represented the government.