Pritilata's bronze sculpture to be installed in port city 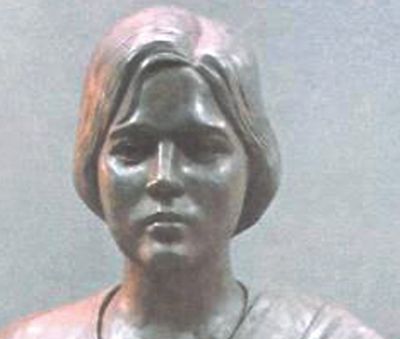 A new bronze sculpture of Pritilata Waddedar, an associate of Master-da Surja Sen and the first Bengali woman to embrace martyrdom for freedom from British colonial rule, will be installed in front of Pahartali Railway School, adjacent to the then European Club, in the port city.
As a tribute to her martyrdom in 1932, the memorial sculpture will be unveiled by Chittagong City Corporation (CCC) Mayor, Md Manjur Alam, today. On the occasion, a cultural programme will be held with the participation of artistes of Rakta Karabi, Udichi, Proma, Bodhan and Charon.
The innovative artwork by internationally famed sculptor Gautam Pal of West Bengal, India is based upon a photograph of Pritilata. The statue uses a traditional sculpture technique and is cast in bronze.
Pritilata's bravery encouraged Master-da Surja Sen to choose her to lead a dangerous operation at European Club, where a notorious signboard with the words “Dogs and Indians are not allowed” hung at its main gate.
On September 24, 1932, a group of seven young members, led by Pritilata, launched the most desperate operation at European Club. On return from the successful expedition Pritilata sacrificed her life by swallowing potassium cyanide as testimony to the fact that women did not lag behind in the independence movement.
As the club had been used as the office of the Divisional Engineer-1 and 2 of Bangladesh Railway, till the early 1990s, the European Club and the exact spot where Pritilata sacrificed her life remained unknown to visitors and locals.
However, patriotic local youth with the support of the then divisional engineer of Railway erected a memorial stone at the place at the end of the '90s.
But the only memorial stone and the neglected state of the historical site evoked much disappointment for the local and overseas visitors as the memorial plaque written in Bengali hardly provide them with appropriate history and information of the movement and sacrifice of Pritilata.
Organisations such as Samajtantrik Mohila Forum (SMF), Samajtantrik Chhatra Front, Charon Cultural Centre and Shishu Kishore Mela, launched a series of programmes demanding erection of a sculpture of Pritilata Waddedar at the spot and preservation of the legacy of Pritilata.
“We had a long campaign and movement to install the statue. Eminent personalities of the city also expressed solidarity with the movement,” said CCC Councilor Jannatul Ferdous, adding that “a memorandum with around 15,000 signatures by both ordinary people and eminent personalities was handed over to CCC Mayor on April 24, 2011 after a yearlong campaign.”
Jannatul Ferdous, who is also vice-president of SMF, extended thanks to the CCC Mayor for recognising the historical importance of the location and supporting the installation of the statue.
Talking to The Daily Star anti-colonial revolutionary Binod Bihari Chowdhury, also convener of the Committee to Observe 80th Death Anniversary of Pritilata, said that it was praiseworthy that the statue had been installed with the effort of some young people of the city, which really was the responsibility of the government.
Extending his thanks to the CCC Mayor for his assistance in bringing the statue from Kolkata, he said, “I would like the history of courageous struggles of women like Pritilata to be disseminated to all corners of the country through such initiatives.”
CCC Mayor Md Manjur Alam told The Daily Star that it had been a long standing demand of the people that a statue of Pritilata be installed in front of European Club and it was a matter of pride for him that it had been installed in his tenure.
“If we do not safeguard the legacy of great characters like Pritilata, the next generation will forget our golden roots,” added the Mayor.