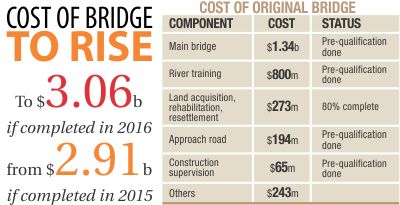 The cost of the Padma bridge project would increase by around 5 percent or $145.75 million due to a one-year delay in starting construction, an expert said yesterday.
The bridge project would now cost $3.06 billion.
The construction was supposed to be done by 2015. Now, it will take a year more if construction work starts next year.
“'Escalation factors' were included when the estimated cost of the project was prepared. Thus, the cost escalation will be minimal,” said Prof Jamilur Reza Choudhury, chief of the technical evaluation committee for the project yesterday.
He said around 5 percent cost increase was expected.
However, Project Director Shafiqul Islam of the Padma bridge project said, “It is natural that the cost will increase due to the delay but we cannot determine it right now. The exact increase will have to be calculated on the basis of new proposals from the project's bidders.”
Prof Jamilur said main construction work of the 6.15km bridge would begin in September next year if the contract for the main bridge construction, the largest component in the project, could be awarded by April, 2013.
“We have to start afresh with the components of the project. It will take several months to complete the procedures,” he told The Daily Star.
The World Bank's $1.2 billion loan would be engaged in six components of the project, including the construction of the bridge, training 14km of the Padma river, supervision consultancy, Mawa approach road and service areas.
The $400 million credit of Japan International Cooperation Agency (Jica) would also be engaged in the construction of the bridge while Islamic Development Bank's $140 million was supposed to meet the cost of the 12km approach road at the Janjira end of the bridge.
Asian Development Bank, the second highest lender ($615 million) in the project, would contribute in the main bridge and river training components.
Five international firms were selected for the bridge construction in July 2010. The World Bank did not accept it on the grounds of design change and asked for a fresh tender. The same five firms qualified again in the second tender in January, 2011.
But the World Bank did not approve the selection and the loan was suspended in September, 2011.
A total of 14km of the river would be trained under this second largest package of Padma bridge project. Of which, 12km is at Janjira end and 2km at Mawa end. Six companies had been selected for this task a year ago which the World Bank did not approve.
Two companies, one Malaysian and a Bangladesh-Malaysian joint venture, became responsive bidders for the construction of the approach road at the Janjira end of the bridge. The Malaysian firm, which had the lowest bid, withdrew sensing that it quoted 29 percent less price from the estimated cost.
The government's contribution in the Padma project is $560 million, majority of which was spent for land acquisition, compensation to the affected people, rehabilitation and resettlement.
The government spent an extra about $31 million to prepare design of the Padma bridge under a separate project but that amount was included in the Padma bridge project cost.