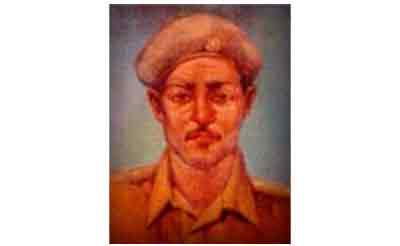 This is a story about a battle that we have forgotten. It was on September 5, 1971, that Bir Sreshtho Nur Mohammad Sheikh sacrificed his life during our War of Liberation.
I am going to introduce you to a hero who dedicated his life for the sake of our beloved motherland, and sacrificed himself for the honour of the green and red flag that symbolises Bangladesh. He was Nur Mohammad Sheikh, a hero of the motherland, who was a Lance Nayek in East Pakistan Rifles during the Liberation War.
Nur Mohammad Sheikh was born in Moheshkhali village near the bank of Chitra River in Narail on February 26, 1936. His father was Mohammad Amanat Sheikh and mother was Mosammat Jinnatunnesa Khanam. From his early life he was interested in games and music rather than studies. He was seriously shocked at his mother's death when he was only ten years old. Just three years after his mother's death, his father also died. He was more involved in music after his father's death. He continued his education up to seventh grade at local schools. After fighting against hard times in his village he went to Dhaka for earning his livelihood.
On March 14, 1959, Nur Mohammad joined the East Pakistan Rifles. He was sent to Rajshahi for training. After finishing the elementary training, he was posted at the Dinajpur sector. He fought for his motherland in 1965 during the Indo-Pakistan and successfully carried out his missions. After that war, he was awarded "Tamgha-e-jung" and "Sitara-e-harob" for his extraordinary performance in the battle field.
In July 1970, he was transferred to Jessore 4 no. wing under the Jessore Headquarter sector. He felt trpped in an uncomfortable environment where there were non-Bangalee officers rather than Bangalee officers. He was happy when a Bangalee officer named Major Abu Osman Chowdhury was appointed to that wing.
In March 1971, Nur Mohammad was on vacation in his village. When the war started, he joined Sector 8 and took part in different battles in Jessore. Lance Nayek Nur Mohammad was selected as the captain of the Standing Patrol team at Goalhati, which was established to monitor the Pakistan army. On September 5, Nur Mohammad was patrolling with 4 fellow soldiers. The Pakistan army managed to find out the position of his team and attacked them from three sides. Nur Mohammad did not want to retreat to his base and continued firing against the Pakistani soldiers. Meanwhile, one of his fellow soldiers was shot and Nur Mohammad tried to carry him to safety. But he was hit by a mortar. Even though he was seriously injured, he continued to provide covering fire for his team. At that time, his Sepoy, Mostafa, urged Nur Mohammad to go with him, but Nur Mohammad refused to do so. He kept on fighting until he died.
He was posthumously awarded the highest gallantry award "Bir Sreshtho" for his bravery during the War of Liberation.
There are some people who work for no returns, Nur Mohammad Sheikh was one of them. He fought for his motherland and sacrificed himself for it. He dreamt of Sonar Bangla. How many of us think of our beloved motherland Bangladesh, for which 3 million people lost their lives?
I am Bangladeshi. I am here under the green and red flag that was established by the braveheart sons of Bangladesh. They are the heroes. Heroes live forever. Bir Sreshtho Nur Mohammad Sheikh also lives forever in the middle of the green and red flag of Bangladesh.