Deal 'as soon as feasible' 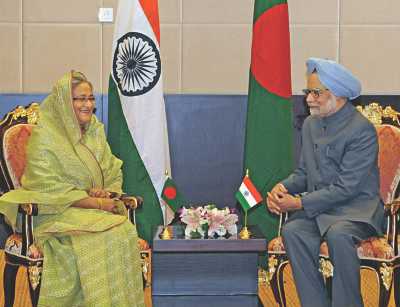 Indian Prime Minister Manmohan Singh yesterday assured his Bangladesh counterpart Sheikh Hasina of India's firm commitment to ink the proposed Teesta water-sharing deal "as soon as feasible".
During their meeting at Grand Azadi Hotel in Tehran ahead of the Non-Aligned Movement (Nam) Summit, Manmohan also said the land boundary agreement would happen at the same time.
The Tipaimukh hydroelectricity project in India's Manipur also came up during the meeting between the two leaders when notes were exchanged. Manmohan reiterated that India would not do anything which would harm the interests of Bangladesh, official sources said.
The 15-minute one-on-one meeting between Manmohan and Hasina was followed by a 40-minute delegation-level discussion between the two sides.
A range of bilateral issues also figured during the discussions.
The Indian premier told Hasina that internal consultations on Teesta water-sharing and also the implementation of the land boundary agreement, which covers an exchange of 111 enclaves between the next-door neighbours, were underway and "both will happen as soon as feasible", according to the sources.
Manmohan Singh made it clear that India was "firmly committed" both to implementing the land boundary accord, signed during his visit to Dhaka in September last year, and the proposed Teesta water agreement which had to be scrapped following last-minute objections raised by West Bengal Chief Minister Mamata Banerjee.
Mamata has set up a one-man commission to study round-the-year availability of water in the West Bengal part of the common river Teesta that flows into Bangladesh so that the West Bengal government could assess the quantum of water that could be shared with its eastern neighbour.
India has to ratify the land boundary agreement through the approval of parliament, for which the ruling UPA government requires a two-thirds majority as it involves an amendment to the constitution. The Indian cabinet has already approved the deal.
However, the opposition BJP and AGP have voiced reservations over the implications of the agreement. The Trinamool Congress, a key UPA ally, is also reported to be concerned over certain aspects of the accord, particularly the one relating to the exchange of enclaves and the population there.
Manmohan and Hasina also discussed the progress in utilisation of the $1 billion line of credit (LoC) extended by India to Bangladesh. Under the LoC, 600 projects worth $600 million have been finalised and $200 million converted into grant.
The two leaders, who met for the second time in eight months since their meeting on the sidelines of the Saarc summit in the Maldives, also appreciated the enhanced cooperation between their two countries, increasing trade spurred by more goods from Bangladesh accessing the Indian market free of duty and setting up of border haats.
Manmohan had, during his visit to Dhaka last year, announced a duty-free entry of certain Bangladeshi garments into the Indian market.
BSS adds: During the meeting, Hasina expressed her happiness over the first meeting of the joint experts group on the proposed Tipaimukh Hydropower Project. "It is a good start," she said.
The meeting of the Bangladesh-India sub-group under the aegis of the Joint Rivers Commission (JRC), held in New Delhi on August 27-28, finalised the terms of reference for a joint study on the dam's impact. India handed over a five-volume Detailed Project Report (DPR) to Bangladesh to enable it carry out an impact study on the hydroelectric dam to be built on the Barak river.
The Indian prime minister said the process was underway to open four more border haats, including in Tripura and Mizoram. He said India was working to export 250MW of electricity from Palatana Power Plant in Tripura to Bangladesh.
The two prime ministers agreed to work together for the economic development of the two neighbouring countries, and laid emphasis on concerted efforts by all Nam countries towards establishing a peaceful world.
Hasina expressed the hope that the Joint Working Group meeting in September on hydropower cooperation between Bangladesh, India and Bhutan would be a success. "We hope to have another such meeting with Nepal and India in October," she added.