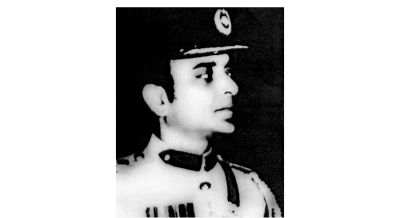 In the dawn of August 15, 1975, Bangabandhu Sheikh Mujibur Rahman made one of his final phone calls to his military secretary Col. Jamil Uddin Ahmad. He had been attacked, Bangabandhu told Col. Jamil, and the residence on Road 32 was surrounded. Then the line went dead.
On a night when conspiracy was afoot and uncertainty gripped the city, and with the country's leadership seemingly paralysed, Col. Jamil did not shrink from doing his duty. He called senior officers, including the chief of army staff, Gen. Shafiullah, and told them to send in troops. He then ordered the Presidential Guard Regiment, charged to defend Bangabandhu, and headed for Road 32 immediately.
Calmly holstering his service revolver, Jamil tried to reassure his wife and children: "Bangabandhu is in danger. How can I not go?"
"Look after my daughters," was his final request before he mounted his jeep and headed off into the darkness.
Arriving in front of Sobhanbagh mosque, Col. Jamil found that the PGR convoy had halted. He demanded to know the reason and was told that there were army units ahead and that there was gunfire. He tried to convince the troops to march forward. Then realising that time was running out, he got into his jeep and prepared to drive into Road 32 himself.
The valiant patriot was shot dead as he sat in his jeep and embraced martyrdom trying to save the leader whom he had, like many others, sworn to protect. It was the steadfast adherence to his principles that guided Col. Jamil in the final moments of his life. On a night when many brave souls hesitated, Jamil did not waver. It was the supreme test of courage and honour -- and he passed with flying colours.
It was not until about 2pm on August 16, 1975, that the family of Col. Jamil learnt anything definitive about his fate. A call came from Gen. Shafiullah, whom Col. Jamil had asked at dawn to send troops to Bangabandhu's rescue. Mrs. Jamil answered the phone and the chief of army choked as he broke the news of her husband's death. Bangladesh had lost a true patriot.
A man of extraordinary character, Col. Jamil had been held hostage in Pakistan during the Liberation War. But his integrity and professionalism as a career army officer led him to be appointed military secretary to Bangabandhu Sheikh Mujibur Rahman in independent Bangladesh.
Gen. Shafiullah, who had trained with Jamil at the Pakistan Military Academy, had this to say when remembering his slain comrade many years later: "Jamil Bhai, myself and the few Bangali officers who were in Pakistan in those days had a regular liaison among ourselves. That was the time when Bangali nationalism was at its budding stage. As members of the majority of the population of Pakistan, we saw it the hard way how small our representations had been in the armed forces. Whenever we met, we used to talk about this. Jamil Bhai's sense of nationalism was the strongest among us and at times he would burst out in anger and desperation."
In 2010, Jamil was promoted posthumously to the rank of Brig. General and awarded the Bir Uttam in recognition of his valour as he was killed trying to save Bangabandhu Sheikh Mujib on the fateful morning of August 15, 1975. That the recognition was so late in coming is a sign of the polarisation of our country, where even supreme acts of courage and sacrifice are seen through the lens of partisanship. For the nation, it's a belated reminder of the man's greatness. And it also is a time to reflect on what the actions of this true hero meant to Bangladesh's history in general.
"Jamil's soul will be in peace and I will also die in peace," Jamil's eldest daughter Tehmina Enayet said. "My father was an honest officer. I'm proud that my father sacrificed his life for such a great leader."
Brig Gen. Jamil's deeds outlive his mortal existence. He answered his country's call and did not hesitate to lay down his life in the line of duty. When the nation stood at a crossroads, Brig. Gen. Jamil displayed the moral courage that marks a great soldier and a true hero.

The writer is Editor, Dhaka Courier and Editor in Chief, United News of Bangladesh (UNB).