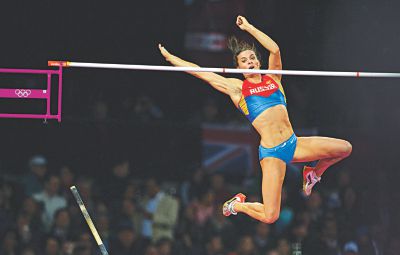 Being the fastest man on Earth doesn't get you through security any quicker at the Olympics.
There's no cutting the line for Usain Bolt or getting London's rigid regulations relaxed.
And the Olympic champion's not happy about it, especially when the security guards hold him up ahead of his showpiece 100-meter event.
"I was in the line, we were waiting to run and the guy was telling me to line up straight," Bolt said early Monday. "I was like, 'Really? We're about to run and they are going to make me stand in a straight line?' There are just some weird rules here."
Such as not being allowed to get skipping ropes past security.
"They said I can't bring it in, and I asked, 'Why?'" Bolt recalled. "They just said, 'It is the rules.' So if I have a rubber band that I need to stretch, I can't take it in. And when I asked why, they say, 'It's just the rules.'
"It's just some weird small rules that don't make any sense to me, personally."
Security has been the only major problem area for games organizers. Thousands of soldiers, sailors and air force personnel had to be drafted to plug the gaps left by the failure by private security contractor G4S to supply all the guards it had promised.
Since the games began, it is mainly G4S guards manning entry and exit points.
"Every venue is different. Wherever it happens to be in the world, there are different protocols in most places," London organizing committee chairman Sebastian Coe said. "That's the nature of it."
But there will be an investigation into Bolt's frustrations, which Coe initially tried to claim had been "lost in the translation."
"I will look at this," Coe said. "I am presuming the skipping rope was there a warm-up aid, so I will, of course, look at that."