Why is the government damaging the high reputation of Prof. Yunus? | The Daily Star
Skip to main content
বাংলা T

Why is the government damaging the high reputation of Prof. Yunus? 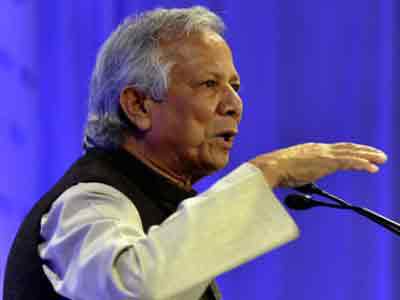 The writer is an eminent Jurist and one of the framers of our Constitution.
(This is the full text of the statement made yesterday (Aug 4) by Dr. Kamal Hossain.)

Dr. Mirza Azizul Islam and Dr. Hossain Zillur Rahman give their reactions to The Daily Star on the proposed amendment to the Grameen Bank Ordinance 1983.
Dr. Hossain Zillur Rahman
The amendment to the Grameen Bank Ordinance 1983 is essentially a step against principals of economic democracy because the voice of owners of the bank, who are mainly the beneficiaries, is being disenfranchised, and government's hand is being strengthened totally. What we find is that it is happening at a time when government's own banks are facing enormous reputation crisis because of the very same problem that government's partisan control of the governance structure of the banks has made a major crisis in the public banking sector. Therefore, this proposed step does not give any confidence. For any viable institution, operational and policy independence is a criteria for success. Arbitrary oversight by the government, particularly where political partisanship is such a big problem, is not conducive to good institution building. So it goes against economic democracy as well as a bad precedence of good governance.
Again investigation into salaries and benefits that Prof Yunus received during his tenure as the bank's managing director past the retirement age is a persistent example of harassing attitude. Essentially, it has nothing to do with good governance. It is essentially another chapter of harassment the government has been continuing for a long time.
It is confirming that the government is not pursuing a principled agenda in the case of Dr.Yunus and Grameen Bank. It is very much motivated by agenda of harassment and control. It is a sad story not only globally but also within the country. Let's forget the global, within the country people are not seeing the mind set of control as a good example.

Dr. Mirza Azizul Islam
First thing is that I do not see any necessity of this government decision. The second thing, what I have seen in the media reports it seems that the chairman is vested with the actual power to appoint the managing director.
Now, there are two things. The first thing is that appointment authority is being taken away from the board, who are the representatives of the shareholders and clients, and they are almost same. The power of appointing the managing director is being taken away from these major stakeholders, and this is not acceptable in principle.
Another factor that makes me seriously concerned that since the chairman will be appointed by the government and he will appoint the managing director so appointment of the chairman may be politicised and so the appointment of the managing director.
Politicisation will not help bear not any good for Grameen Bank. Hence, Grameen Bank should be kept above any sort of political interest. As we have seen that pollicisation has seriously affecting our public banks.
In the case of government's investigation into the salaries and benefits that Dr. Yunus received during his tenure as the bank's managing director past the retirement age of 60, government can handle the issue legally, but, previously, Bangladesh Bank raised an objection with this matter, and after getting clarification from Grameen Bank they did not pursue this matter. The government is playing with the age factor, but the board of Grameen Bank exempted the age limit. Now, another question may arise about whether the board was empowered to do it, and that can be legally evaluated. But my point is even if this had happened Bangladesh Bank did not raise any further objections when they did audits afterwards. Finally, assuming that it was illegal, but it is a matter of reality that he enjoyed the facilities as per the rule of Grameen Bank. Usually, when such situation arises, it is solved by giving post-facto approval. This could have been done in this case, instead of trying to prove whether it is legal or illegal and especially when he is not working as a managing director anymore. So, I do not think there is any valid point of bringing up what happened in the past.

Dr. Mirza Azizul Islam is a former adviser to a caretaker goverment.